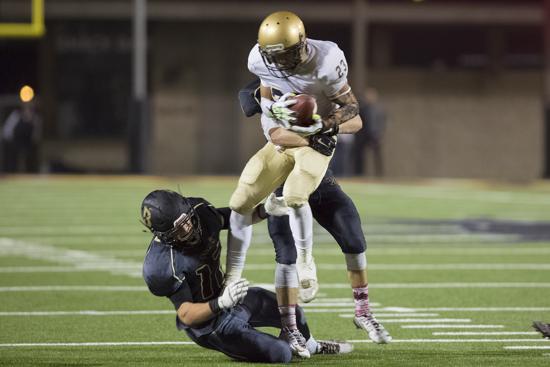 Mater Dei Catholic receiver Quentin Frazier will provide a target for whoever wins the starting job at quarterback for the Crusaders.

Scouting report: With all-league wide receiver Hernandez, an inviting 6-foot-3 target, look for the Lancers to pass behind returning quarterback Tejeda, an athletic 6-footer. Pineda was a second-team all-league choice as a sophomore and at 190 pounds won’t be easy to bring down. The line will be well-manned as six experienced players at 220 pounds or more return, led by the Hanau (6-2, 250) and Flores (6-3, 260). It was a tough turnaround for the program last year after going 10-2 the year before, but a lot more talent returns this season on both sides of the ball. Several key sophomores could be major contributors.

Scouting report: Spruill, who rushed for more than 1,000 yards last season, will try to pick up where he left off running behind fellow first-team all-leaguer Anthony (6-0, 240) and Preciado, a 6-3, 245-pound junior who started last year. The line is solid with veterans like Washington (260) and Puamau (245) being joined by juniors Tuavao (270) and Munoz (260). Another junior, Michael Wilson, looks like the early leader in the battle at quarterback and he has veteran receivers Williams and Berry as targets. Solid group returns but will need some help in the depth department.

Scouting report: Making a run at the section championship and missing by an eyelash should help the Crusaders’ participation numbers. Good choices at quarterback among veterans Rieta and Jones plus 6-2 newcomer Domonic Wood-Anderson. Rieta passed for 1,243 yards last year. The line is thin, but Escobar (240) should get some help from Abelardo Cetto-Rodriguez (265) and Micha Scott (285). Lots of options with RB Verdell, just a junior, and wideouts like Frazier, Moses, Bayless and Williams-Kee available. Even the kicking game is in good hands with Alex Golembiewski returning. Three veteran linebackers and four experienced DBs should help the Crusaders get off to a solid start.

Scouting report: With just three returning starters, one would suspect Hay’s club would be rebuilding. The Red Devils are doing just that, but with Castillo (6-3, 305), Larios (6-2, 275) and Mora (6-4, 285) anchoring the offensive line (and expected to play defense — at least at the start of the season), it’s not all that bad. The key will be how quickly newcomers step up to replace some of the 32 veterans who graduated. Sometimes listing a kicker as a top player is a sign of desperation, but Gutierrez is the real deal, converting 39 of 46 extra points last year. Still, replacing the likes of Raven Middleton will be tough.