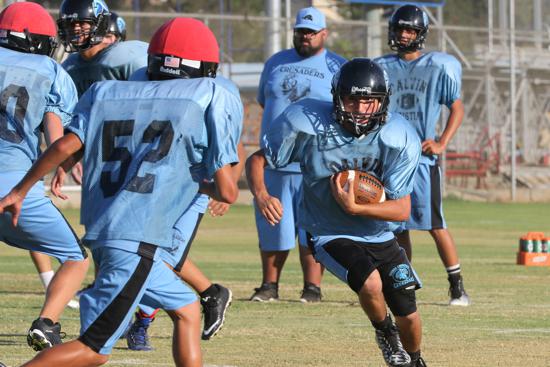 Scouting report: The Royal Knights made the move to 8-man this year despite an initial hesitation by the players. Solorio and Matsumoto should dominate most of the offense on the ground, running behind Seydel and Duvall. Rheam plans to be the coach for just this season after returning when his replacement got a new job and couldn’t remain coach.

Scouting report: Another team making the switch from 11-man football to 8-man this season. The Crusaders are planning to lean on Moon, who rushed for 755 yards and nine TDs, and Lafler, who took over at quarterback in the third game last year and passed for 225 yards. Calvin Christian averaged 258 rushing yards per game last year and should be a running team again. Senti also contributed with 384 rushing yards and four TDs. Kreglow hopes the defense, with all-leaguer Truppa (46 tackles), Moon (39 tackles), Crouch (29 tackles) and all-leaguer Sanders, can play an even bigger role this season.

Scouting report: After a winless season in 2014, the Knights opted to switch to 8-man and the numbers dropped to 18 players at the start of the season. Lyyjoki approved the move as beneficial for the players. Hamilton will lead the defense after he collected 63 tackles last season. Hale is a dangerous kick returner.

Scouting report: Make no mistake, Schwartz, who played both 8-man and 11-man football in high school, wants to run the ball despite having Mitchell, who passed for 1,190 yards and 10 TDs, back. But the Warriors had just 477 rushing yards and seven TDs in 2014, which Mowers should help improve on. Mitchell’s favorite targets will be Pion-Kentel, who had 33 catches for 494 yards, and Garwood, who caught 30 for 469 yards. The pair combined for eight TDs. Defensively, the Warriors are building off Pion-Kentel (29 tackles), Na (43 tackles, 2 fumble recoveries) and Mowers (22 tackles).

Scouting report: There is hope on campus that the second season in 8-man will be much more rewarding. For that to happen, Battaglia, now in his third season as the starter as a junior, Lieberman, headed to MIT as a kicker, and Mayer will have to lead the way on offense. Pidgeon is the top returning tackler after collecting 56 tops as a junior in 2014. Carpowich hopes to have a bit more leadership, pointing out that a few players off the school’s baseball team that lost in the Division V semifinals are also playing football.