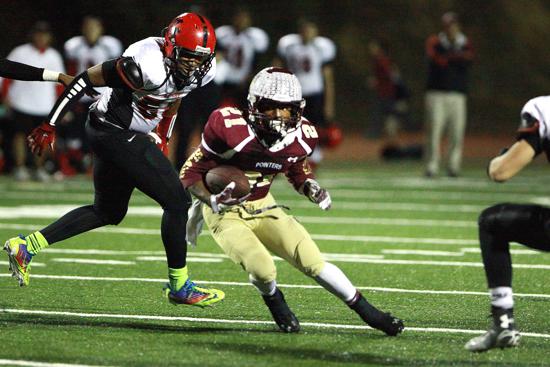 Scouting report: The biggest challenge for the Vikings is replacing Collin Rugg and his county-record 46 touchdown passes. Brown is accurate and a threat to run the ball, adding a new dimension to the offense. Fudge and Levenson put up good stats last year. Carter said Duran was the best player in his program last year but played mostly on JV because of maturity issues — the coach expects him to easily surpass 1,000 yards rushing this season. The Vikings are looking to finish games stronger this year after losing five games by less than a touchdown last season.

Scouting report: The Warhawks lose last year’s starting quarterback and top rusher but return almost everyone else, including their top seven receivers. Madyun, Lewis, Thomas and Quinlin combined for 2,072 yards and 24 touchdowns through the air. The running back group is deep, led by Jackson. David Falo and JoJo Falo are huge and anchor an offensive line that returns four starters. The linebacker corps could be the best in the county. Niu, Collins and Meray combined last season for 250 tackles, 22 tackles for loss, four interceptions and four sacks.

Scouting report: Matson is excited about his team and expects the Buccaneers to bounce back after a tough season playing all road games during last year’s stadium construction. Just a sophomore, Correa will run the spread offense, but he’ll have weapons like Clark, a playmaker running and catching the ball, as well as the explosive trio of Ransom, Sanders and Harness-Anderson. Hines and Jackson are junior tackles who Matson believes have Division-I college potential. Edge rushers Bass and Lewis fuel the high-pressure defense, while Ransom and Myles Dumas are lock-down corners.

Scouting report: The Pointers return a strong nucleus of players from 2014’s successful team and add some good young players as well. Griffin averaged about 13 yards per carry last season and could be one of the county’s best rushers as a senior, while Carter and Johnson are talented weapons in Hastings’ motion-fly offense. Katashima and Daniels provide size, strength and athleticism in the trenches on both sides of the ball. The secondary is inexperienced, but Hastings said they’re athletic and he expects them flourish under new secondary coach and 12-year NFL veteran Na’il Diggs.

Scouting report: The Falcons return most starters on offense, including Podraza, who passed for nearly 1,800 yards and 15 touchdowns as a junior. Batts led the team in rushing last year before an injury cut his season short. The coaches hope he’ll rebound to form a dangerous one-two punch with Brown that can find running room behind four returning starters on the offensive line. The defense returns just three starters and will rely on Spiritwolf and Hessenflow to anchor the line while Numanlia-Wone will lead from the defensive backfield.