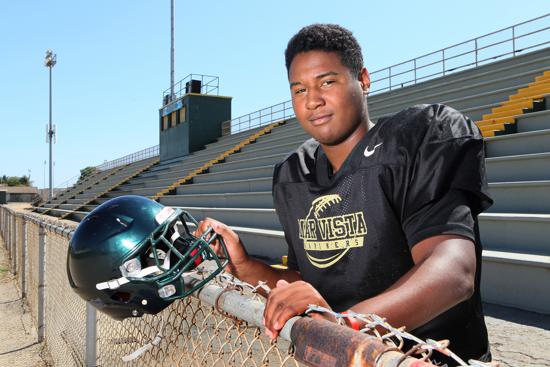 IMPERIAL BEACH — Last November, Mar Vista High’s Hugh Anthony was just like any other student and football player, working hard in the classroom, looking forward to Friday night lights and enjoying the camaraderie of his friends.

Then everything spun out of control.

His mother lost her job, and just like that, the family was forced to move in with a cousin in Santee. Though his mother would wake up early to drive him to school, Anthony knew the living conditions weren’t the best for everyone.

While his mother searched for an accounting job, others on the team knew something was wrong. Once his plight came to light, Anthony was invited to spend his nights with team members, most notably Jacob Hinojosa, a friend since he started playing Pop Warner football at age 5.

“It did get me down,” said Anthony, a 17-year-old defensive end and offensive guard, who always seems to carry a smile. “At that time, school and football were my main focus. When I was at school, I didn’t think much about what was happening, but once I got home it was right there.”

“If you didn’t know what was happening, you’d never know anything was different,” Arciaga said. “He’s such a happy-go-lucky guy. A lot of people in that situation would think that life stinks, but ‘Dirrty’ (Anthony’s nickname) didn’t miss a practice or feel sorry for himself. He’s pretty special.

“Imperial Beach is really a close-knit community, so I wasn’t surprised when people stepped up and took him in.”

The 6-foot, 230-pounder didn’t let his family situation hurt him in the classroom or on the field. He maintained his 3.2 GPA while earning team MVP and first-team All-Metro South Bay League honors on defense.

“It says something that his teammates voted him MVP,” Arciaga said. “Rarely does an underclassman earn that award, especially a lineman.”

“It felt good,” he said. “All the hard work paid off. It was an honor to be recognized by my teammates and opponents.”

Now, about that nickname, “Dirrty,” which is what everyone — save for maybe the principal — calls him.

“My dad was an Atlanta Falcons fan, and when I was born (in 1998), they were called the Dirty Birds. My mom liked birds.”

So with a unique spelling, “Dirrty” it was from the time he put on his first football uniform for the Imperial Beach Chiefs.

Meanwhile, things at home have improved since November. His mother and younger sister — his father has not been a direct part of his life since his freshman year — have found affordable housing as “Dirrty” prepares for his senior season.

“I prefer defensive end to guard because you get more recognition and I like to hit people,” Anthony said. “It’s more active. But I’ve learned a lot by playing tackle and guard.