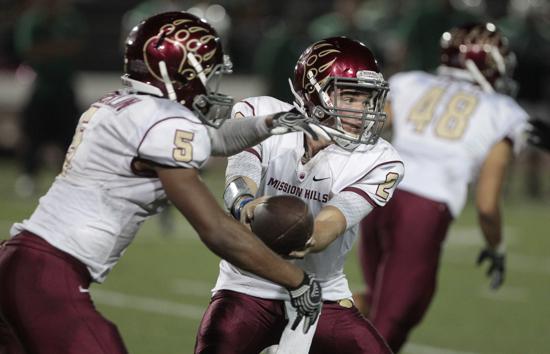 The senior back rushed for 228 yards on 29 carries, including touchdown runs of 19 and 16 yards in the fourth quarter, to help the host Grizzlies dispatch Los Angeles Crenshaw 38-26 on Friday night.

In the second half, McFarlin gained 187 yards for an attack that had senior Dakota Miller and sophomore Jack Tuttle splitting the quarterback duties.

Troy Warner sealed the victory with his second interception in the closing period.

Miller, who tossed 30 touchdown passes last season, scored on a 14-yard run and a 1-yard sneak in the first half to help stake Mission Hills to a 17-14 lead at the break over the Cougars (0-1), who reached the L.A. Section Division I quarterfinals a year ago.

In the third quarter, Theodore Graham scored on a 30-yard run for Mission Hills.

The Grizzlies opened the scoring on their first possession when Miller’s initial TD completed a five-play, 38-yard march set up by a 24-yard punt.

Crenshaw answered two plays later with an 80-yard TD by Rayshawn Williams, who caught the ball wide open at the Mission Hills 35.