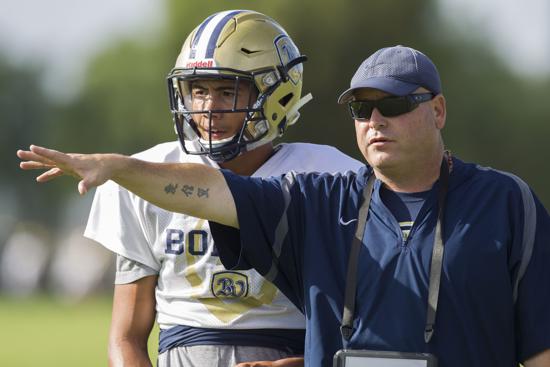 In his third year as head coach at Bonita Vista, Chris Thompson is counting on top players like Atoa Fox to help lead the team.

Chula Vista — One at a time, three players stepped into Bonita Vista High football coach Chris Thompson’s office. The questions posed to each player varied, but one question was consistent: What’s your goal this season?

The answers to the latter question were identical. Win the San Diego Section Division III championship, plus advance to the state playoffs.

The goal is lofty, particularly when you consider that the Barons have not celebrated a winning season since 2009.

“Because we haven’t had a winning season in a while people may look at us like we’re crazy,” said junior quarterback Anthony Posada, a third-year starter. “But that’s my goal. And I have confidence in my brothers on this team.”

Bonita Vista has never played for a section championship much less won one. But there are reasons optimism abounds on Otay Lakes Road.

Eighteen starters return from a team that posted a 5-6 record last season, losing to Morse 14-7 in the first round of the playoffs. And on opening day last Friday, the Barons shocked some people, blanking traditional Division I power Vista 12-0.

“You could tell they were ready to slug it out,” said Vista coach Dan Williams. “Some schools, when we get off the bus, you can tell they’re thinking, ‘Oh (no).’ Those kids stood strong, stood tall and did a great job.”

There are two main reasons the Barons might be playing deep into November. One, Bonita Vista is blessed with talent.

Running back Greg Bell, a transfer from Eastlake, rushed for 124 yards against Vista. Safety Atoa Fox is a punishing tackler. Senior Chris Boguille plays running back, middle linebacker and kicked two field goals in the opener.

Cornerback Ethan Williams is being recruited by San Diego State.

Said Thompson, in his third season as the Barons’ head coach, “Our skill guys are as good as anybody in the county.”

Secondly, the team appears to believe in Thompson, whose coaching background is unique.

Thompson, 47, coached at Mira Mesa for 21 years at the varsity level, mainly as offensive coordinator. He coached one season at Vista, helping the Panthers win a section title in 2010 and one season at Poway.

He taught math at Mira Mesa for five years but does not teach at Bonita Vista. He has worked primarily in the private sector, developing and selling football video editing systems.

He traveled across the country and was exposed to coaching minds at the high school, major college and NFL levels.

“I could talk to the programming techy people, then turn around, talk to the football coach and bring the two of them together,” said Thompson.

Four captains drafted teams and those players are responsible for each other. If one player is late to practice all the players on his team are punished with extra conditioning.

“He expects us to become young men,” Fox said as the team prepared to face Imperial on the road tonight.

The team motto is One Family, One Purpose. That family extends to players past and present. Christian Gilstrap, a backup senior safety on last year’s team, died in a car accident this summer.

Of the lessons he’s trying to impart, Thompson said, “We build the whole person. You do that, winning takes care of itself.”