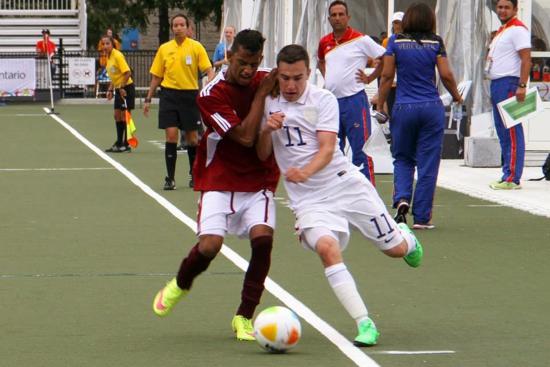 Mason Abbiate (11) has a mild case of cerebral palsy as a result of being born nearly four months premature.

Don’t blame Mason Abbiate if he has to pinch himself to make sure the last eight months of his life have been real. Up until January of this year, he was your typical teenager playing club soccer.

Now the senior at Del Norte High is traveling the world as the youngest member of the U.S. Paralympic National Soccer Team and preparing for the 2016 Paralympic Games in Rio de Janeiro.

“I haven’t even really had a chance to think about all of it,” said Abbiate, 17, who has a mild case of cerebral palsy as a result of being born nearly four months premature. “It has all been happening so fast. It has been a great opportunity for me to represent my country.”

Doctors told Mason’s parents it would be highly unlikely he would ever talk or walk after he entered the world weighing just 2 pounds and in need of multiple surgeries.

“To go from that to being on the USA soccer homepage and seeing your kid’s picture (online) is pretty amazing,” Diego said.

That’s not all that is amazing. Mason had never stepped foot out of the country before this year. Now he can check off England, Portugal and Canada.

“It is an incredible success story for a kid who loves soccer,” said San Diego Soccer Club Director Brian Quinn, who is responsible for connecting Mason with the U.S. Paralympic team. “The fact that he gets to play is great. I wasn’t sure he would qualify.”

In order to be part of the Paralympics, an athlete must have a primary impairment. Mason’s cerebral palsy, though not severe, hinders the right side of his body. Yet he has been playing soccer since age 6 and many of his coaches didn’t even know he had the disorder.

“I have some challenges on the soccer field, but they are not major,” he said. “I have learned to adapt to my condition.”

But Quinn, who has known the Abbiate family for some eight years, remembered hearing of Mason’s condition. He asked more about it, knowing that the Paralympic program was looking for young players.

Mason was invited to attend a camp at the Chula Vista Olympic Training Center in January. Seven other athletes from around the country between the ages of 14-19 also were invited. Of those, Mason was the only one asked to train with the national team.

“It was a camp where they were looking for players to play maybe 10 years down the road,” Mason said. “But within one or two days I was on the actual Paralympic team. That week was crazy for me and it all happened so quick from there.”

Mason played with the team in Portugal in March and then it was off to England in June. The team recently got back from Toronto, site of the Parapan American Games.

Mason, who is left footed, saw plenty of playing time at the midfielder position (Paralympics plays 7-on-7 soccer).

“If all goes well, I would love to do this for the rest of my life,” said Mason, who plans to study childhood development in college with the hope of becoming a kindergarten or first-grade teacher.

“It would be awesome.”