San Marcos gets a wake-up call 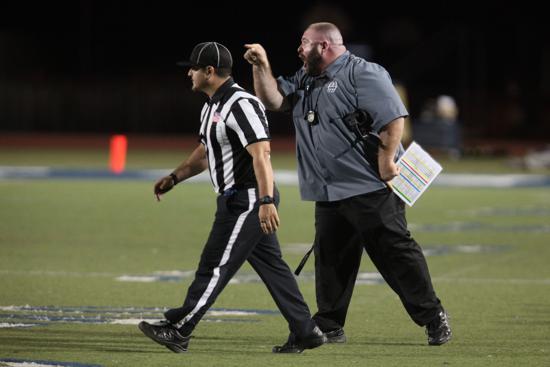 Coach Jason Texler has the San Marcos Knights off to a 2-1 start this season.

SAN MARCOS — Favored San Marcos High slept through most of the first quarter, then awakened and came back to thwart Escondido’s upset bid 43-7 Friday night at Excalibur Field.

Trailing 7-0, the Knights appeared to answer back with 1:48 left in the period on an apparent 70-yard touchdown run by Terrell Burgess down the left sideline on the first play after his 20-yard kickoff return.

The touchdown was nullified by a penalty. But the next time it got the ball back, San Marcos was not going to be denied.

Josh Bornes scored from 11 yards out and Myles Liss’ PAT tied the game at 7-7.

That’s when things began to snowball.

Bryson Bolin’s 28-yard run on a keeper sparked the Knights on a drive that appeared to stall at fourth-and-2 at the Escondido 15.

Passing on a chance at a chip-shot field goal, San Marcos lined up and gave the ball to Tyler Rogers on a straight-ahead run. The Knights line blew open a hole and Rogers carried 4 yards to the 11. Rogers ran the ball in for the touchdown on the following play and Bolin passed to Joah Robinett for a two-point conversion.

In the second half Bolin scored on a 3-yard run and passed to Max Graven for the 2-point conversion. He also threw a 39-yard touchdown pass to Burgess, and Burgess also tacked on a 34-yard TD run.