Before the kickoff, heroes remembered 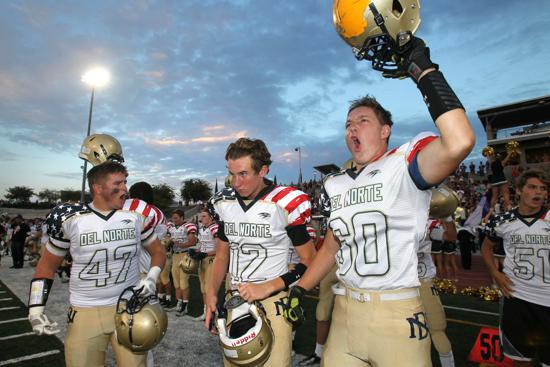 Del Norte players (left to right) Scot McKirdy, Jake Moore and Zachary Zacchilli join their teammates in wearing special stars and stripes jerseys to honor the military and first responders in remembrance of 9/11.

Never forget … Where were you 14 years ago? … Pay your respects

From Twitter to Facebook to Instagram, to the sight of flags at half staff, people paused Friday to remember 9/11, when terrorists hijacked four planes, leading to the fiery collapse of the World Trade Center’s twin towers and the loss of more than 3,000 American lives.

At Del Norte High, one of a number of schools marking the date, the football team paid its respects Friday night.

The Nighthawks celebrated their third Military Appreciation Night. With the date falling on the 14th anniversary of 9/11, Del Norte renamed the evening Military and First Responders Night.

The Nighthawks, who fell to Westview 21-3, wore special white jerseys, the shoulders trimmed in red, white and blue stars and stripes. The special jerseys were purchased by people wanting to recognize first responders or military personnel.

Those being honored were introduced before the game, their names stitched across the back of the players’ jerseys. After the game, the honored men and women were given the jerseys.

Minutes before kickoff, Del Norte junior Anthony Ulrich walked up to his grandfather, Dave Elhoff, and said, “Thanks, grandpa.”

Elhoff was one of the spectators being honored.

“It means a whole lot and it’s important,” said Elhoff, 65, a former Navy lieutenant commander who served in the Vietnam War. “Freedom is not free. It exists today only because of American blood that has been shed.”

“It was our way of walking around school, thanking all the people who have sacrificed so much,” said two-way lineman Zachary Zacchilli.

Zacchilli’s father and late grandfather both served in the Navy.

The military theme was not restricted to the football team. Del Norte’s dance team wore T-shirts reading “We (Heart) Our Troops.” In between chanting, “You can’t do that,” when Westview drew a penalty, Del Norte’s spirited student section yelled, “USA! USA! USA!”

Taking time to thank the military and first responders carries special meaning to first-year Del Norte coach Patrick Coleman. His father is a retired Marine who worked for the U.S. Foreign Service Department.

Lower Manhattan was Coleman’s home in college when he attended the New School for Social Research.

On Sept. 11, 2001, Coleman, then a 33-year-old teacher at Mira Mesa High, woke up listening to the radio and heard that a plane had crashed into a World Trade Center.

“I jumped up to turn on the TV and watched live as the second plane hit,” he said. “It was emotional for me, being from there, knowing people who still lived there. Luckily, no one I knew was badly affected by it physically. Of course, emotionally and spiritually …”

He didn’t finish the sentence.