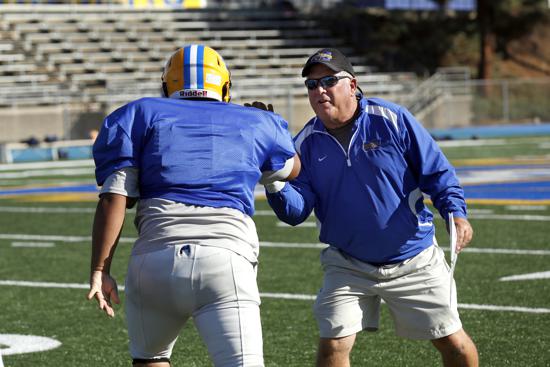 In his 21 years as Mira Mesa head football coach, Gary Blevins has served six athletic directors, including himself.

The local landscape has changed a bit since Gary Blevins began teaching at Mira Mesa High in 1980.

Thirty-five years ago, when you traveled west on Mira Mesa Boulevard beyond the intersection of Camino Ruiz, once you passed the shopping center adjacent to the high school, there was nothing but open fields for miles to Interstate 805.

All that time, all those changes, Blevins has remained a physical education teacher and football coach at Mira Mesa. Fifteen years the JV head coach, Blevins is now in his 21st season as the Marauders’ varsity head coach. In San Diego County, no active varsity coach has been at a school longer.

“He’s a great coach,” says Mira Mesa assistant Aurelio Morales. “If he weren’t a great coach he wouldn’t have been at the same school so long.”

Blevins has served four principals and six athletic directors, counting himself. With a 135-97-4 record, he ranks 19th among football coaches for most wins at San Diego County schools.

He takes pride that his three children graduated from the school. Sons Chris and Garrett played for him and Chris is a longtime assistant. He brags about the school’s academic standing as much as its on-field success.

“I always felt my job was to carry Mira Mesa on my back as best I could,” he says.

Asked what fascinates him about high school football, the 60-year-old Blevins says, “I’ll tell you one thing, I’ve always enjoyed Friday nights. You don’t know how it’s going to end up.”

The past two weeks serve as a prime example. Two weeks ago the Marauders were drubbed by El Camino 23-0. Seven days later Mira Mesa hit the road and beat a talented Mt. Carmel team 41-34.

Blevins is an inclusive coach, from his assistants down to his players. At the varsity level he has seldom served as his offensive or defensive coordinator.

“Part of my success at the school has been the loyal assistants I’ve had over the years,” he says. “When you let guys have input they don’t leave and go someplace else.”

Blevins tried to leave Mira Mesa once. He applied for the Scripps Ranch job in 1993, a job that went to the late Chris Miller.

From 1999 through 2010 under Blevins, Mira Mesa strung together 12 consecutive winning seasons and a combined 95-48-1 record. After six semifinal losses, Blevins finally reached the championship game in 2010 before the Marauders lost to Vista 33-21. Mira Mesa is still seeking its first section title.

The past three seasons have been lean — 3-7, 5-6 and 3-7. This year’s team is hardly devoid of talent with the likes of running back Chamberlin Liddell-Patacsil and tight end/defensive end Devin Sanders.

Sanders compliments Blevins for counseling players on more than blocking and tackling.

“He shows us how to present ourselves to college coaches,” says Sanders. “Stand up straight, look the coach in the eye, shake their hand with a strong grip, think of what I want to say before I say it.”

How long will Blevins continue coaching?

“Until my wife tells me it’s over,” he jokes.

Sitting inside a nearby Mexican restaurant on a rainy Tuesday, Blevins adds, “I still feel I can be an impact to the community. If not, I’ll turn in the keys.”

Active football coaches with the most consecutive years at the same school: