West Hills hoping for a jump-start

Win over La Jolla could provide boost, just as it did last season 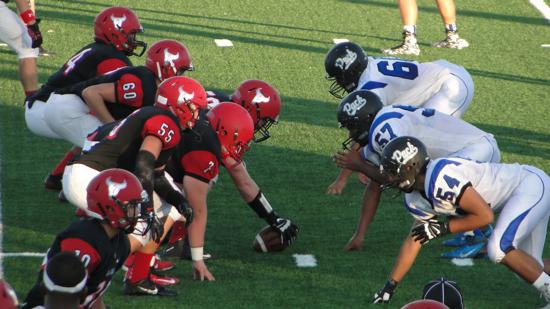 La Jolla and West Hills line up in a nonleague game won by the Wolf Pack.

In 2014, West Hills went into a Week 4 matchup against La Jolla with a 1-2 record. A win jump-started the team’s season as the Wolf Pack reeled off seven consecutive victories to finish the regular season 8-2.

West Hills is hoping the same thing happens this year.

Following a safety scored by La Jolla (1-3), the Wolf Pack added to their lead with a 2-yard touchdown run by Moyer. But the Vikings responded with a 4-yard touchdown run of their own on a quarterback sneak by Cole Dimich to make the score 15-9.

The West Hills offense was firing on all cylinders to finish the first half as Moyer hit Austin Estrada for an 8-yard TD and scored on a 27-yard keeper to extend the Wolf Pack’s lead to 28-9 at the break.

West Hills began the second half with a three-and-out, and La Jolla’s Joseph Duran returned the ensuing punt 65 yards to cut the deficit to 13.

West Hills answered with an 80-yard drive, capped by a 17-yard touchdown pass from Moyer to Taj Broomfield.

Moyer finished 14 of 23 for 236 yards and three touchdowns through the air, while adding 115 yards and two TDs on the ground.