Knights score the first seven times they have the ball 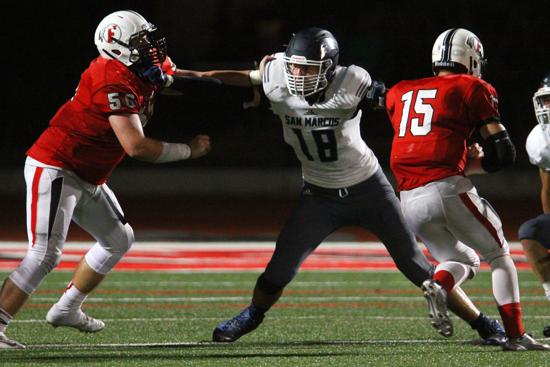 FALLBROOK — San Marcos is on a roll.

The Knights scored the first seven times they had the ball while routing host Fallbrook 42-0 in a nonleague game Friday that ended with a running clock the entire fourth quarter.

The Knights (3-1) have won three straight by a combined score of 135-7 following a season-opening loss to No. 5 Oceanside. They have also won three in a row over the Warriors (2-2) dating back to the 2013 San Diego Section Division III playoffs.

Junior quarterback Bryson Bolin lit up the Fallbrook defense, completing 23 of 31 passes for 440 yards and a career-best six touchdowns, three to senior Terrell Burgess — who had five catches and a game-high 171 receiving yards — and one each to sophomore Kyle Philips, junior Tyler Rogers and junior Tylee Hodson.

“There was a lot of great blocking up front,” Bolin said. “We got the ball out quickly, and (the receivers) ran good routes and got open.”

The Knights’ defense was equally dominant as San Marcos outgained Fallbrook 567 yards to 184.

The Warriors’ two-game win streak, in which they outscored their opponents 106-18, ended.

With senior Antonio Gomez making his first start at quarterback in place of injured senior Jack Grantham, Fallbrook did not attempt a pass. Senior Parker Martin led the Warriors with 72 rushing yards.