Helix in control against Cathedral

No. 2-ranked Highlanders set tone on both sides of the ball against Dons 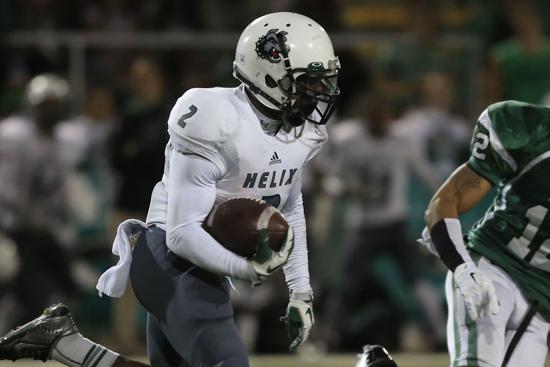 Helix running back Nate Stinson rushed for 176 yards on 16 carries.

LA MESA — In Arizona, the pollsters have catapulted Scottsdale Chaparral all the way to No. 4 after starting at No. 18.

The Firebirds beat Helix in the season-opener 33-28 and have tagged on two more impressive victories. But the win over the Highlanders caught everyone’s attention and looks better each week, including this one after No. 2 Helix downed No. 8 Cathedral Catholic 37-7 Friday night at Jim Arnaiz Stadium.

Speedy Nate Stinson was virtually unstoppable after the first quarter. He had 176 yards on 16 carries, including touchdown runs of 5, 51 and 31 yards.

Quarterback Michael Austin had a big game, too, completing 13 of 19 for 238 yards and a pair of TDs.

Helix (2-1) set the tempo on both sides of the ball before intermission.

Stinson and Austin paced the offense with Stinson rushing for 102 yards, including the 51-yard touchdown with just 30.9 seconds before the break. He also started the scoring with a 5-yarder late in the first quarter.

Austin completed 10 of 15 attempts for 123 yards with several key third-down conversions. He was especially sharp, going 7-for-8, in guiding the Scotties 71 yards in 10 plays.

Austin hit Rashad Scott for a 16-yard gain to take the ball to the 5-yard line and rewarded Scott for his effort by finding him alone for the touchdown.

Meanwhile, the defense limited the run-oriented Dons to just 32 yards and one first down in the first half, giving Helix excellent field position. Ezekiel Noa led the way with a sack and two solo tackles. He finished with three sacks.

Cathedral Catholic (1-3) appeared to have a 98-yard touchdown on the second-half kickoff by Hogan Irwin, but the play was called back. The Dons still started on the Helix 26 and scored on Jack Lewis’ 1-yard run.