Lancers quarterback throws for three touchdowns in romp over Panthers 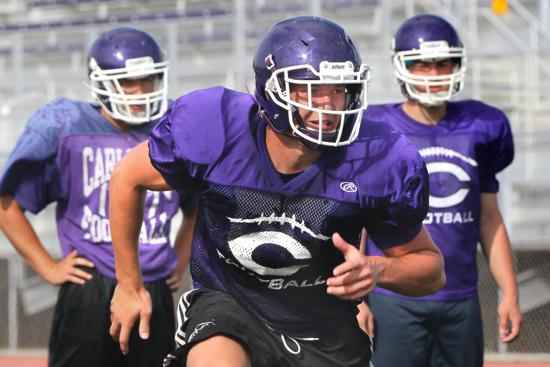 Troy Cassidy made a key interception for Carlsbad.

With both teams coming in 1-2 while mixing in a 70-point outburst (in the Lancers’ case last week) and 61 points (by the Panthers two weeks ago) among otherwise disappointing performances, the question was which teams were going to show up.

The Lancers’ passing combination of quarterback Shea Morales to Matthew Spiering provided some definitive answers in the second quarter and Carlsbad went on to win 33-0 as Morales threw for three touchdowns.

After an interception by Troy Cassidy, Carlsbad scored with 7:07 left in the half on a 33-yard strike from Morales to Spiering in the left corner of the end zone to put the Lancers up 7-0.

Later in the quarter, Carlsbad took a punt at its own 12 and started a 3-minute, 21-second drive that culminated with a 32-yard pass from Morales to Spiering which made it 13-0 with 16 seconds remaining in the half.

Morales added a 31-yard TD pass to Kellen Pete in the third quarter.

Vista’s Elijah Davis blocked a PAT and the Panthers got three spectacular tackles from Carlos Rodriguez that caused negative or zero yardage by Carlsbad on punt returns.