Norsemen hand Mar Vista its first loss of the season 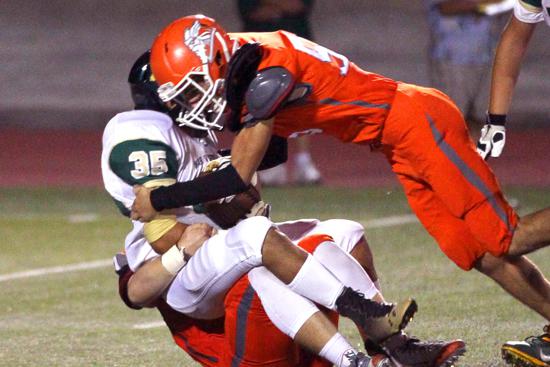 Mar Vista's Nicholas Perez gets brought down by Valhalla's Brandon Leffew above and a teammate below.

El Cajon — Rare is the occasion when a team wins by 47 points that the defense deserves most of the accolades. This was one of them.

Coming off a big win and then a bye, Valhalla steamrollered Mar Vista 47-0 on Friday night in the first-ever meeting between the two schools.

“We asked our defense to come out and perform,” Valhalla coach Charles Bussey said. “And they did. What a game!”

With nine returning starters from last year, Valhalla’s defense limited the Mariners (3-1) to 4 total yards, including minus-22 rushing.

Valhalla (2-1) jumped on a pair of turnovers in the first five minutes to take a 14-0 lead.

Cade Baker intercepted a pass at the 31-yard line, and five plays later Rahshaun Sharpe rushed into the end zone from 4 yards. Two plays later, Chris Yohe recovered a fumble at the 20-yard line, leading to a 16-yard scoring pass from Phillip Naseh to Neever Kryakos.

A third big play by Valhalla — a blocked punt in the end zone by Logan Baker — led to a 21-0 advantage when Jerome Johnson (11 carries, 82 yards) bulled over from 1 yard out.

Valhalla limited the Mariners to one first down and minus-7 total yards in the first half and began every offensive possession in Mar Vista’s zone.

Logan Baker had two sacks along with the blocked punt and several other tackles for loss. Cade Baker (no relation) had the interception and a sack.

Mar Vista was playing without the services of leading rusher Khalil Spruill, who had rushed for 397 yards and four TDs before injuring his ankle.

“Obviously having Khalil out was a bit of a crutch for us,” Mar Vista coach Tyler Arciaga said. “We have to find a way to get it done.”