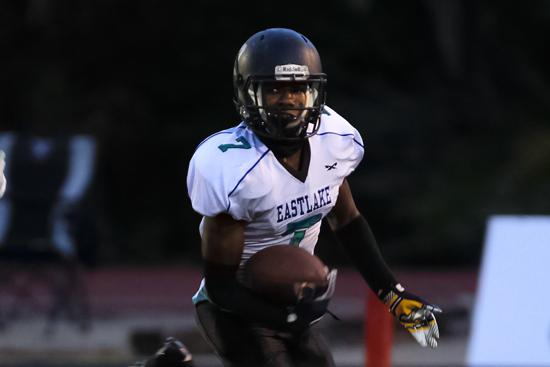 After the Warhawks (2-2) took a 36-29 lead on the first possession of overtime, the Titans (2-2) came right back and scored on a 17-yard one-handed grab of a pass from Izzack Morales to Josh Olave.

The Titans opted to go for the win on the two-point conversion. Morales sprinted right and just before he ran out of real estate, flipped the ball to a diving Dueitt for the winning score.

Riding a powerful and diverse running game, the Titans raced out to a 22-7 halftime lead. Seven different runners combined for 244 yards on the ground in the half, led by Traylon Reed with 101 yards in 10 carries.

Three different Titans carried and scored. Nate Sweat started it off, going in from the 27 with 34 seconds left in the first quarter. Olave and Jae Vitin added second-quarter TD runs of 2 and 1 yard respectively.

The Warhawks controlled the second half, rallying to take a 29-22 lead behind a 21-yard run by Darius Jackson, a 16-yard run by Shaheed Madyun and a 32-yard scoring pass from Terrell Carter to Marc Quinlin.

“They’re a real good team — physical, big, strong and athletic,” said Madison coach Rick Jackson of the Titans. “They’re the kind of teams we want to play; we want to play the best in San Diego.”