Always in a hurry at Grossmont 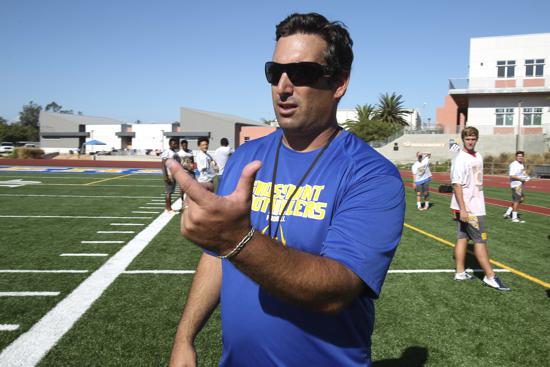 Mount Miguel coach Tom Karlo liked it so much he installed it for the Matadors.

Then when Oregon’s hurry-up offense burst onto the scene in 2010, Karlo scrapped the zone-read for the hurry-up.

As the only team in the county using the hurry-up in 2011, Mount Miguel scored 10 more points per game than the previous season.

“We were always looking for something new. We enjoy not doing the traditional things,” Karlo said.

Karlo took over at Grossmont in 2012, and in his three-plus years at the helm his offense has scored nearly 40 points per game.

Unlike some teams that have quick-tempo packages or two-minute offenses, the Foothillers live and breathe by the hurry-up. With signals coming from the sideline, Grossmont runs around 160 plays in two-hour lightning-speed practices.

“You have to pay attention,” receiver Khaleed Davis said. “You could look away and miss a whole play. You take a knee and the next thing you know you’re back out on the field.”

This year’s offense is sometimes well-oiled and sometimes misfiring. Karlo is using two quarterbacks, neither of whom is consistently on target, and the offensive line is new.

Sometimes touchdowns come out of nowhere, such as an 80-yard drive that took 17 seconds last week against Hilltop. Other times the offense sputters.

Every year, Grossmont’s offense evolves. Small adjustments, such as a different route or different blocking scheme, are made on plays. Karlo gets a lot of advice from the Oregon coaching staff.

The connection is Ducks defensive backs coach John Neal, whom Karlo knows from playing and coaching at Alabama-Birmingham in the late 1990s.

Every spring, the Grossmont coaching staff goes up to Oregon to meet with the Ducks staff, engineers of one of the fastest offenses in college football.

“We try to figure out how to implement this on a whole level,” Karlo said. “It’s not just a hurry-up offense. It’s a hurry-up team. It’s a system. The idea that it’s just an offense isn’t going to work.”

The Foothillers’ practice schedule mirrors Oregon’s: full-throttle early in the week, rest and relax for a day, then a light practice before game day. The players not only love the fast practices, they love the offense, too.

“(It’s) high-risk, high-reward. That’s how we roll and we’re going to take our chances and bet on us,” said quarterback Jared Redfield, whose team hosts Lincoln tonight.

“If we can play faster, that will negate any speed (they) have that we don’t,” Karlo said. “There are teams with better athletes, but our kids play faster and they know how to get things done quicker.”

Karlo is a numbers guy and has all his team’s stats from the past five years memorized like a mantra. But football’s core tenet still rings true.