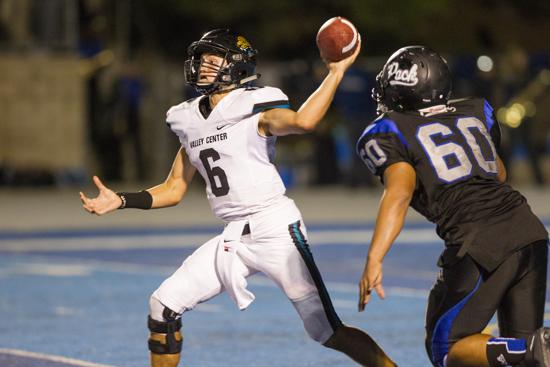 Valley Center quarterback Rhett Reilly was 11 of 16 passing for 273 yards and four TDs.

“We have to run the ball, and we have to stop their run,” Gilster said.

The Valley Center defense held up its part of the bargain, but the offense instead did its damage through the air.

Valley Center quarterback Rhett Reilly threw four touchdowns — including three scoring throws of more than 50 yards in the first half — as the Jaguars beat West Hills 35-12 to spoil the Wolf Pack’s homecoming.

Reilly entered the game with four touchdowns through the first four games of the season, but on Friday he threw three touchdowns on 4-of-5 passing in the first half. He finished the game 11 of 16 for 273 yards, adding a fourth touchdown in the third quarter.

That gave Valley Center (3-2) a 21-12 lead at halftime that it added to on its first drive of the third quarter when Reilly connected with Moffitt for a 7-yard touchdown.

Leading 28-12 near the end of the third quarter, the Jaguars finally went to the ground. Running back Andrew Navarro — who didn’t carry the ball at all in the first half — rushed for 59 of his team’s 60 yards on the drive, including a 31-yard touchdown.

The Valley Center defense, meanwhile, allowed West Hills (2-3) to rush for just 99 yards. Wolf Pack quarterback Spencer Moyer burned them for 111 yards and a touchdown in the first quarter, but the Jaguars’ defense stiffened and allowed just 105 yards passing and one more score the rest of the way.