RBV running back arrives in a rush 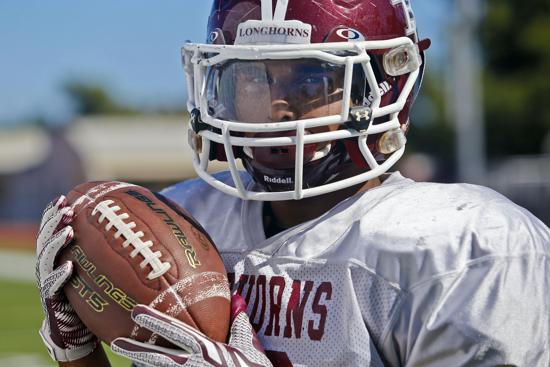 After rushing for 436 yards against Steele Canyon, Rancho Buena Vista senior Dominic Taylor compiled 337 yards on the ground against Oceanside.

Days after his hard-to-believe performance against Steele Canyon two weeks ago, Rancho Buena Vista High running back Dominic Taylor scanned the newspaper and pulled a double-take. Not knowing how many yards he gained against the Cougars, Taylor was stunned that his 33-carry, 436-yard effort tied the San Diego Section record for most yards rushing in a game.

“I actually put my name out there,” he said.

Until then, Taylor was barely known outside his family. His 2013 sophomore season at Escondido was limited to pine patrol, rushing for a minuscule 88 yards while an underclassman piled up 1,423 yards. Fearing more bench time as a junior, Taylor transferred to RBV.

After sitting out the requisite five games last season under a section transfer rule, Taylor injured his shins, hurt an ankle and spent more time in the training room than on the field.

“He would show some flashes in practice, then all of a sudden his legs would shut down,” said Longhorns coach Paul Gomes, whose team is 0-5 with a bye tonight. “I thought, ‘OK, this kid can accelerate like I haven’t seen.’ Saying that, I was pretty frustrated not to be able to use him.”

Even this season Taylor started modestly.

Season opener vs. Poway: 15 carries, 78 carries, out with a concussion.

Game 2: did not play vs. Westview, recovering from the concussion.

Wanting to motivate his often-injured tailback, Gomes took a playful dig at Taylor one day at practice when the senior complained about a nagging injury.

Walking toward Taylor while carrying a Kleenex, Gomes, who has used the ploy more than once with players, said, “Here Dominic, let me wipe your nose with this tissue.”

Be it improved health, a hardened attitude or both, Taylor busted out. After the 436-yard effort vs. Steele Canyon, Taylor hit fourth-ranked Oceanside with 337 yards rushing on 26 carries in a 28-9 loss last week.

“We saw him against Steele Canyon, and thought, ‘Did he really do that?’ ” said Oceanside coach Dave Rodriguez.

For Rodriguez, seeing live was believing.

“The young man, he ran really hard,” Rodriguez said. “We put a few licks on him. I know he felt them, but every time he kept coming back, running hard.”

Taylor stands 5-feet-9, weighs 180 pounds, is sculpted like a body builder and lends new credence to the phrase “north-south” runner. He hits holes with gusto. Once in the secondary, it’s one cut, two at the most and dart toward the goal line.

Taylor’s 436 yards against Steele Canyon tied the 11-man section record set by Mt. Carmel’s Ken James in 2009. Taylor rushed for touchdowns covering 52 and 46 yards, plus he unleashed runs of 67 and 73 yards.

“He accelerated after the initial hit, which is a killer for you,” said Steele Canyon coach Scott Longerbone. “Most running backs slow after the initial hit. It seemed the first guy who hit him made him run that much faster. His yards after contact were ridiculous against us.”

Taylor, who has yet to be recruited by any college programs, is quick to praise teammates who have paved the way for his 773 yards rushing the past two games.

“I can’t get anywhere if I can’t get past the defensive line,” he said. “My O-line has opened huge holes.”

Gomes believes Taylor is barely scratching his talent surface. He wants him to be more fit, capable of finishing games rather than exiting with injuries or having to come out for multiple plays.

To Gomes, that means sleeping and eating properly, immediately treating aches and pains, running plays 40 and 50 yards downfield in practice rather than just 15 or 20. Gomes did notice an attitudinal shift after the Oceanside loss.

“He took the loss pretty hard because he felt he didn’t fulfill what he should have done for the team,” Gomes said.

Taylor failed to score vs. the Pirates and fumbled twice.

Three years ago, RBV broke an 18-game losing streak when Daviante Sayles carried 51 times for 339 yards and scored four TDs against Scripps Ranch. Dating back to last season, the Longhorns are currently mired in a 12-game losing streak.

Wanting to evoke memories of Sayles, longing to prove his toughness and loathing losing, Taylor issued a three-word promise to Gomes.

Rancho Buena Vista has produced some of the most prolific running backs in San Diego Section history. According to the section record book, 28 backs have rushed for 2,100 or more yards in a season. Three are from RBV. One of them, Markeith Ross, did so twice. A look at the RBV Longhorns’ 2,100-yard club and where they rank in single-season rushing history. Mission Bay’s Dillon Baxter is the section’s single-season rushing leader with 2,974 yards in 2009.

•At his current pace of 238 yards per game, if Taylor stays healthy and RBV plays one playoff game, he will finish with 2,381 yards, 13th all-time.