8-man leaves it all on a smaller field

Rosters are limited, but athletes play with a passion for the game 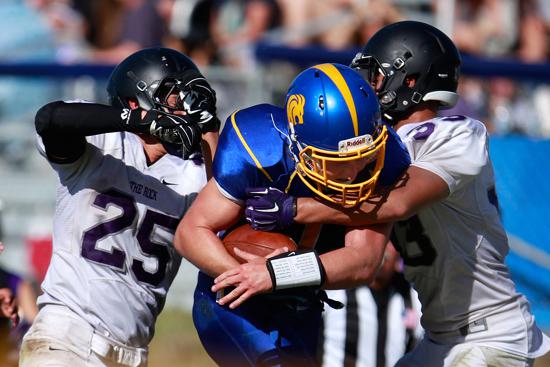 They were real tears, an outward manifestation of the disappointment felt by high school football players after losing a homecoming game — even an 8-man football homecoming game.

For the 12 San Diego high schools playing 8-man football this season, every completion, interception and tackle is just as real as the 11-man game.

And nothing irritates the Jewish Academy Lions as much as people who tell them 8-man football isn’t “real” football.

Friday’s Ocean League matchup between The Rock (6-1, 1-0) and San Diego Jewish (1-2, 0-1) was certainly real football, especially the performance of Warriors quarterback Jordan Mitchell, who ran for three touchdowns and passed for two more.

While the strategy and rules differ slightly (the 8-man field is 40 yards wide instead of 53), the atmosphere is similar to any other high school football game.

Rap and hip-hop tunes blared from a speaker inside the SDJA locker room before Friday’s 2:15 p.m. kickoff. Coaches went over last-minute adjustments that included tweaking a defensive audible call, and then a former Jewish Academy player delivered a hair-raising pregame speech.

Outside, students formed a human tunnel for players as they walked to the field, a special greeting reserved for homecoming. Lions players said it’s rare to have fellow students come to games, but they attribute that to the Carmel Valley school’s small size and focus on academics.

As the last of the 16 players walked through the human tunnel, a male student turned to his friend with a confused look.

With just 16 players, almost everyone plays on both sides of the ball. Battaglia is the Lions’ starting quarterback, linebacker and punt returner; he also blocks on kick returns and punts.

Fellow captain Rami Lieberman scored two rushing touchdowns in the loss to the Rock Academy and also played defense, but he’s preparing to commit to a Division III college next week where he’ll play his best two positions — kicker and punter.

“In 8-man there aren’t that many specialties, like the huge lineman or the fast running back,” Lieberman said. “You have to play every position.”

That’s the reality of 8-man football, where the tackling, blocking, throwing and running are real. And sometimes so are the tears.