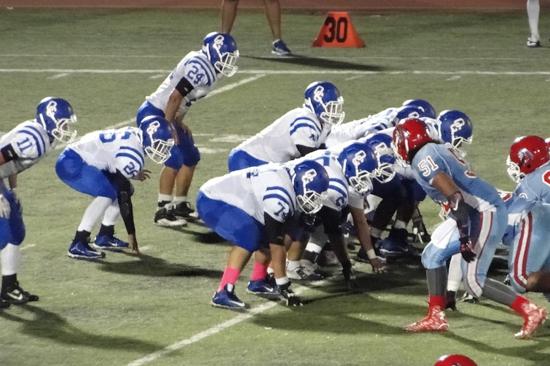 Tight formations like this were common when Orange Glen went against El Cajon Valley on Friday night.

With Orange Glen’s double-wing, double-tight offense, and running back Nathan McCullough and quarterback Tyson Smith running the ball for El Cajon Valley, both teams combined for fewer than 15 pass attempts.

In the end, McCullough and the Braves’ rushing attack proved too much as El Cajon Valley defeated Orange Glen 32-13.

Orange Glen (4-2) established its run game quickly, driving 60 yards on 11 carries, all by running back Richard Barry. The result was a Barry 1-yard touchdown run to take a 6-0 lead.

But the Braves (4-1) responded quickly, courtesy of a 79-yard drive that ended with a 16-yard touchdown pass from Tyson Smith to Charles Smith.

In the second quarter, an Orange Glen fumble in its own territory gave the Braves momentum and the lead as McCullough ran it in from 6 yards out to make it 12-6 at halftime.

The second half belonged to McCullough, who scored on runs of 1, 60 and 50 yards.

Orange Glen cut the lead to 18-13 in the third quarter on Barry’s 23-yard touchdown, but McCullough shut the door, finishing the game with 281 yards rushing and four TDs.