No. 3 Oceanside and No. 1 Mission Hills play in a big-time nonleague game 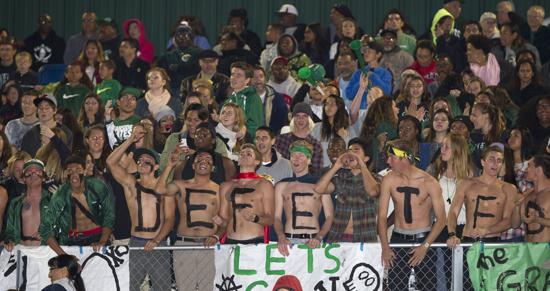 Respect all. Fear none.

In a series that has morphed into one of the fiercest rivalries in San Diego County, the Oceanside and Mission Hills high school football programs respect the heck out of each other.

They don’t, however, fear matching up.

The teams renew the rivalry tonight when Oceanside (4-1) — ranked No. 3 in the county — travels to No. 1 Mission Hills (5-0) for a nonleague contest.

“I’ve heard all about this rivalry,” said first-year Oceanside coach Dave Rodriguez, who was an assistant at Oceanside for nearly a decade before spending 12 seasons in the Tucson area. “I know Mission Hills is very good, very well-coached.

“I remember (Mission Hills coach) Chris Hauser when he was at Vista. His teams are always prepared. And they’ll be fired up.

“We had rivals in Tucson, but nothing that will match the intensity of this game.

“Oceanside-Mission Hills has turned into something special.”

“This is a nonleague game, a game neither team has to play,” said Hauser, who took over as head coach when Mission Hills opened in 2004. “But it’s a game both teams want to play, a great midseason showdown before we get into league play.

“It’s fun. It’s exciting. It brings out the best in both teams.

“It should be a great game.”

Oceanside enters the game ranked No. 99 in the state. Its only loss was to Eastside Catholic, the No. 1-ranked team in the state of Washington.

Mission Hills is ranked No. 40 in the state.

“This is the game I’ve been shooting for,” said Mission Hills quarterback Dakota Miller, a player who has been hobbled by hamstring and ankle problems.

“I started at Oceanside and transferred to Mission Hills. I know and respect the guys at Oceanside. They have great players.

“But this is a rivalry game, and I want to play and play my best.”

Forced to sit out three weeks for throwing a punch against Torrey Pines, this is his first game back.

“I’m so looking forward to getting back on the field,” said Warner, who said he learned valuable lessons sitting out.

“To be back for this game, this rivalry, it’s special.”

Since the first meeting in 2007, Mission Hills has one San Diego Section title to its credit.

“It seems like we take turns beating each other,” said Oceanside lineman Nick Zimmerman. “They have a good team, a talented team.

“This is a great rivalry. It’s exciting to play them.”

“This is going to be a high-intensity game,” said Oceanside receiver Anthony Martinez. “We play football because we like to compete, and this game is great competition.”

The series has produced three NFL players — Brian Schwenke and Sam Brenner of Oceanside and Jamaar Jarrett of Mission Hills. Dozens of players have gone on to play in college.

“We play a lot of big games,” said Oceanside lineman Jamie Harris. “This game is a big challenge, great competition.

“I think both teams are looking forward to playing.”