Westview off to its best start 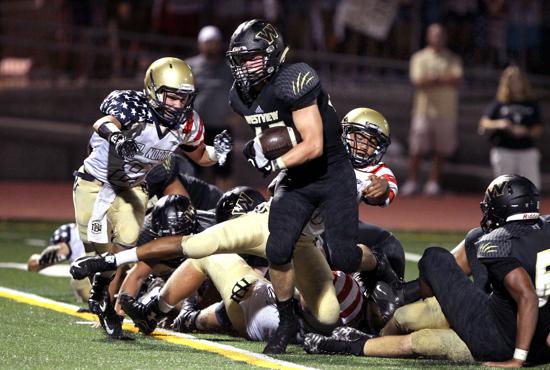 Westview's Joe Bennett (shown in an earlier game) scored a crucial touchdown in the Wolverines' win over Rancho Bernardo on Friday.

The Westview High football team is off to its best start in school history and it took down the defending Palomar League champions to get there.

Cole Sutton’s interception led to a Talon Osmon 30-yard field goal with 1:02 to go as the seventh-ranked Wolverines defeated No. 8 Rancho Bernardo 20-17 Friday night in the Palomar League opener for both schools.

Osmon’s kick split the uprights and sent the spirited home crowd into a frenzy on homecoming night. It also moved Westview to 6-0, beating its previous best start of 5-1 in 2008.

The Wolverines trailed 17-10 late in the third quarter when Michael Shadowen ignited the comeback. The senior blocked a Broncos’ punt attempt in the end zone and Joe Bennett hopped on the loose ball for a touchdown to tie the game at 17.

Both teams had opportunities early in the fourth quarter to take the lead, but couldn’t cash in. Westview finally did when Sutton intercepted a pass at the Broncos’ 38-yard line with 2:58 to go.

The Wolverines drew a pass interference call to move to the 21 and two runs by A.J. Leonard moved the ball to the Broncos’ 13. Osmon then made his second field goal of the night.

Westview forced four turnovers and scored six points off those turnovers. The Broncos (4-2, 0-1) took a 14-10 lead into halftime behind 47- and 59-yard TD runs by Anthony Barnum.