Grizzlies score early and often in lopsided win over No. 3 Oceanside 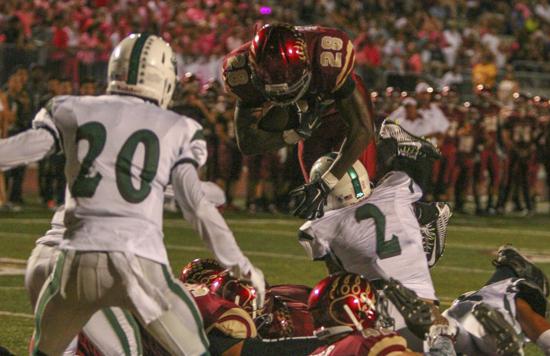 Mission Hills running back Nehemiah McFarlin breaks through a tackle attempt by Oceanside’s P.J. Poumele as he goes over the top for a first-half touchdown.

Scoring on each of its first seven possessions, the No. 1-ranked Grizzlies beat No. 3 Oceanside 45-0 in a nonleague game Friday night.

And the last thing either team expected — a running clock in the fourth quarter.

The margin of victory was the largest in the 11 games between the teams.

Mission Hills running back Nehemiah McFarlin scored on runs of 7, 1, 1 and 14 yards and finished with 14 carries for 155 yards, all but seven of those yards in the first half.

McFarlin also had a pair of pass receptions for 52 yards.

The Grizzlies (6-0) hit the Pirates (4-2) with big plays as Tony Huebner had a 37-yard run on the first drive, McFarlin had a 44-yard run on the second, quarterback Jack Tuttle and McFarlin hooked up on a 28-yard pass completion on the third and a 17-yarder on the fourth drive.

The last drive of the first half was two plays with McFarlin speeding 35 yards before blasting into the end zone from 14 yards out.

Tuttle hit Troy Warner with an 87-yard scoring pass on Mission Hills’ second play of the second half to make it 38-0.

Tuttle and Warner hooked up on a 42-yard pass play late in the third quarter, setting up the final Grizzlies touchdown, a 5-yard run by Tuttle.

Oceanside crossed midfield once in the first half, but the drive fizzled when Will Stricklin intercepted a Robby Beardsley pass.

Josiah Moore also had an interception for Mission Hills while Elijah Bulls had a pair of sacks.

The Mission Hills defense held Oceanside to 94 rushing yards on 24 carries. Seven of those plays went for zero or minus yards.