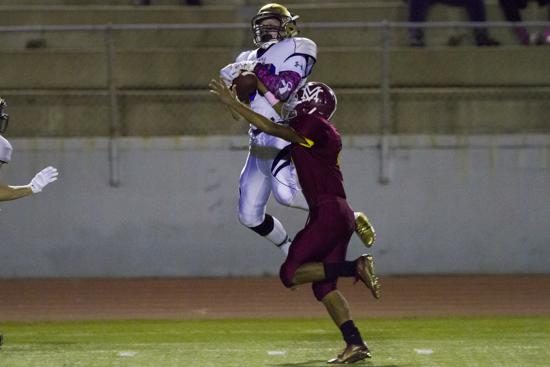 SPRING VALLEY — Call it a reversal of fortunes for Santana and Monte Vista in their Grossmont Valley League opener Friday night.

Santana scored more points in the first half than it had in the last three years against the Monarchs, pulling away with a 35-13 victory behind the play of quarterback Frankie Gutierrez and tailback Bobby Wallace.

Gutierrez rushed 10 times for 88 yards and three touchdowns and threw for 134 yards with two TDs, including a 36-yard TD to Brock Ellis. Wallace rushed 19 times for 72 yards and caught a 1-yard TD pass as Santana finished with 309 total yards and got five turnovers on defense.

“It was fun,” Santana coach Tim Estes said. “The offense was kind of rolling, which was nice. Frankie did a great job running the show.”

“It felt good to get some revenge,” said Gutierrez, who was 10-for-16 passing.

Santana struck early and then took advantage of three Monte Vista turnovers to take a 21-6 lead into halftime. On the game’s second play, Gutierrez raced 44 yards for a 7-0 lead.

Early in the second quarter, Santana’s Domenic Dehoyos recovered a fumble at the 29-yard line that led to Wallace’s score. Late in the half, Gutierrez scored on a 1-yard keeper that capped a 15-play, 91-yard drive that featured 13 rushes and a 23-yard pass from Gutierrez to Adam Childress.

Gutierrez collected his 13th rushing TD early in the third quarter on another 1-yard keeper.