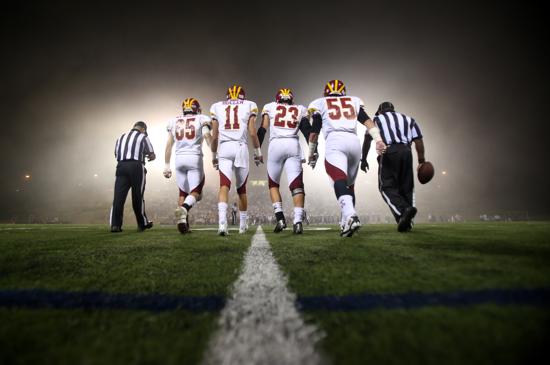 Torrey Pines scored one of its biggest wins in years with Friday's triumph over Oceanside.

Torrey Pines waited until the last minute, but the Falcons got it done.

Oceanside had gone ahead on Anthony Martinez’s 1-yard touchdown run with 5:17 left, but missed the extra point. The Pirates (4-3, 0-1 league) appeared to catch a break when Moses Tauiliili fell on a fumble near midfield to thwart Torrey Pines’ ensuing drive with just under four minutes to play.

The Falcons (2-5, 1-1) had one more shot at a comeback, though, and made the most of it. Spitters, in the game after starter Caden Kelley suffered an apparent shoulder injury earlier in the fourth quarter, engineered a drive that started at the Falcons’ own 16 and ended with his dramatic connection with Gange.

The Pirates raced to a 14-0 first-quarter lead, scoring on two of their first three possessions. Tevin Meadows plunged 11 yards through the right side of the line for a touchdown, and after Nick Zimmerman recovered a fumble deep in the Falcons’ territory, Robby Beardsley connected with Ronan Ivanonich for a 19-yard score.

Torrey Pines got on the scoreboard with a five-play, 74-yard drive on its third possession, capped by Matthew Feeler’s 37-yard sprint through the left side.