Everything clicks for Madison 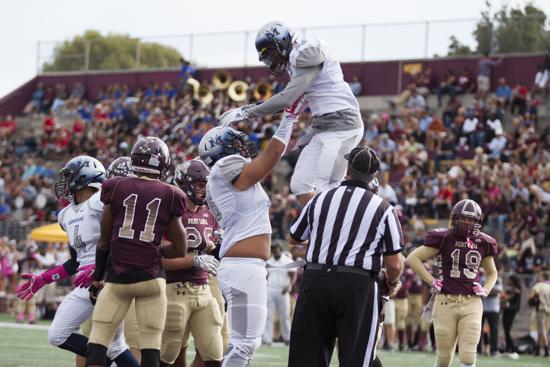 Madison receiver Brandon Lewis is thrown into the air by a teammate as the Warhawks celebrate Lewis' touchdown catch.

Midway through the third quarter, Point Loma football coach Mike Hastings said to no one in particular, “This just isn’t our day.”

It’s a significant victory because ever since the Warhawks (5-2, 2-0) entered the Western League in 2010, the winner of this game has gone on to capture the title.

Carter, a 6-foot-1 junior, completed 11 of 15 passes with TD tosses of 5 and 34 yards to Brandon Lewis as well as a 38-yarder to Elijah Thomas on his only aerial after intermission.

“We treated this like a championship game,” said Carter. “We were pretty confident we could win, but we needed to do everything right. We’ve come a long ways since early in the season — I know I wasn’t as ready as I should have been at the start.”

Carter guided the Warhawks to TDs on seven of eight drives, mixing his accurate passing and the runs of Buchanan, a junior who scored on a pair of 2-yard runs. His 120 yards came on just nine carries, including a 77-yarder to start the game.

“The offense was challenged to make a play early,” said Buchanan. “It bothered me that I didn’t score (on the play), but since we eventually scored (on his 2-yarder), it worked out.”

Asked if the unranked Warhawks should be considered a Top 10 team, Buchanan smiled and said “definitely.”

It certainly was not the Pointers’ day as Point Loma (4-3, 0-1) amassed just 82 yards rushing (including four sacks) and 84 passing.

“Our goal is to make the Open playoffs,” said Madison coach Rick Jackson. “Playing the best should help us.”