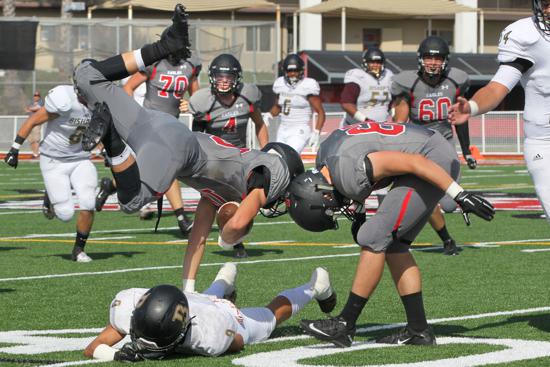 SOLANA BEACH — Santa Fe Christian is scoring points in bunches. So naturally the talk is about the Eagles’ offense.

In Saturday’s Coastal League football game with Bishop’s, the offense did its part in a 51-8 win.

The defense, however, was spectacular, piling up 10 quarterback sacks and holding the Knights to 15 rushing yards on 29 attempts.

“We followed our keys and made plays,” said sophomore defensive end Demitri Washington, who had four sacks.

“Our defensive backs did a great job in coverage, giving us that extra second to get to the quarterback.

“Bishop’s put a licking on us last year (winning 35-3). This is a lot better feeling than a year ago.”

Gavin Dill added three sacks while Luke Sanders, Hank Ontiveros and Kevin Loney each had one.

It could have been worse, but the elusive Mozes Mooney had two series at quarterback for Bishop’s in the second half and escaped trouble three times.

“If we do our jobs, things are set up for a sack,” said Dill, a junior defensive end.

Quarterback Conner Whitton completed 3 of 5 passes for 115 yards — one going 73 yards to Caleb Phillips, another 35 yards to RJ Walker, who also rushed for 32 yards.

“We take each game individually,” said Sanders, a sophomore defensive lineman. “But we know what’s ahead of us (La Jolla Country Day and a nonleague game at Olympian).

“We’ve learned a lot this year, and we have a lot still to learn.

“The next two weeks will show how much we’ve learned.”