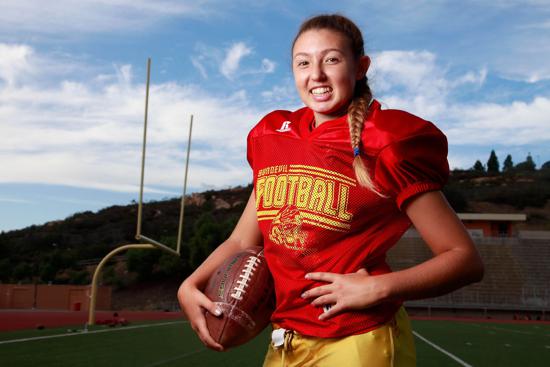 Mt. Carmel junior Ashlin Morey is 32-for-35 on extra points this season for the Sundevils, who host Torrey Pines in a nonleague game on Friday night.

On Friday evenings in the fall, though, you’ll find Morey dressed in shoulder pads and a helmet with her Sundevils football teammates, moonlighting as one of the county’s most reliable placekickers.

“She’s got a powerful leg and is incredibly accurate,” Mt. Carmel coach John Anderson said. “She’s one of the most steady kids on the team. I’m really impressed with her.”

With female kickers still relatively rare, Morey has been a model of consistency for a Mt. Carmel team that is 5-3 overall and 1-2 in the Palomar League. In her first season playing varsity, she is 32-for-35 on PAT tries (with one of the misses resulting from a mishandled hold) and has made one of three field goal attempts, a 35-yarder against Ramona. Morey doesn’t handle kickoff duties.

A 5-foot-5 midfielder for the Sundevils girls soccer team and the Notts Forest club team in Clairemont, Morey has translated her fútbol skills to the football field with hard work and coaching.

She joined the freshman team on a whim during her first week on campus when she saw a flier advertising kicker tryouts. Working with special teams coaches Teddy Anderson and Rick Sharpe, she has steadily improved her technique, first learning to get enough loft on the ball to get it over the offensive and defensive lines, then developing the accuracy to keep it between the uprights, and finally harnessing her power to provide Mt. Carmel with a viable option to go for field goals when entering the red zone.

“My mom was a little scared at first because she didn’t want me to get hurt, but my family and friends have all been really supportive,” Morey said.

“Freshman year, it was definitely a little difficult, but sophomore year I started getting the hang of it, and now it’s all sort of muscle memory. It was tough to get the timing down, and there are a lot of differences kicking a soccer ball and a football.”

Anderson said Morey has been accepted as a member of the team. When she considered giving up football this summer, her coaches and teammates enthusiastically encouraged her to reconsider. Her performance on the field has validated that decision.

“She comes out here and works as hard as everybody else every single day,” said Carter Couch, the Sundevils’ senior long snapper. “She gets the job done and has put on a great performance every game.”

Morey said she would consider playing soccer or football — or both — in college if the opportunity presents itself. On the gridiron, she has a role model in April Goss, the Kent State kicker who last month became the second female player to score in an FBS game.

“I thought that was cool,” Morey said. “I strive to be like that.”