Cougars running back gives thanks for love, laughter in blended family 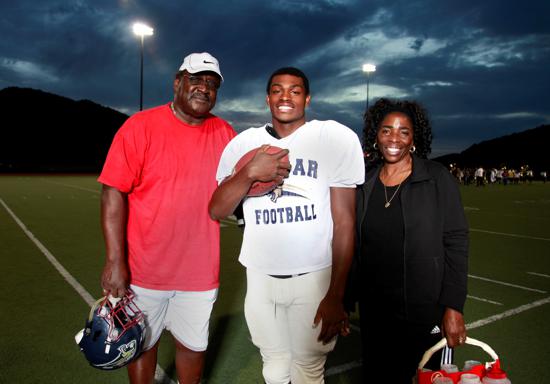 Steele Canyon senior Malcolm Anders, a running back for the Cougars who also competes in track and field, has thrived in the environment provided by foster parents Levi Mitchell and Laverne Mitchell, who also are Anders’ uncle and aunt.

Top Ramen. That’s what Malcolm Anders remembers his mother serving him the day she walked out on Malcolm and his younger sisters, never to return. He was 5 years old.

“My mom and my sisters were in the room, sitting at a table,” recalls Anders, a senior football and track standout at Steele Canyon High. “She’s feeding me Top Ramen. She leaves to go to the store and never comes back.”

The scene unfolded in Tracy, 54 miles east of Oakland. It set off an unsettling early childhood for Anders, being separated from one of his sisters for months, bouncing among four foster care families in barely a year.

Sitting at a Denny’s on Saturday morning, Anders says, “I remember I used to ask, ‘Has anyone seen my family?’ I asked my foster home (guardians), ‘Have you seen my sister? Do you know where she’s at?’ They’d say, ‘No, we have no information.’”

If Anders’ story is part tears, it is more laughter and love. Malcolm, 17, and his three sisters eventually settled with Levi and Laverne Mitchell. Laverne is Malcolm’s aunt, his father’s sister.

The Mitchells raised six children of their own, invited nine foster children into their home, plus helped “many others over the years,” says Laverne.

“We both loooooove children,” offers Laverne.

Devout Christians, the Mitchells pray for guidance before bringing a child into their home.

“They keep us on our knees,” Laverne jokes.

Adds Levi, “We have been blessed. Of all the kids that came to this house, we have never had any real trouble out of them.”

As for Malcolm, he’s a 5-foot-11, 190-pound running back. His stats for the 5-3 Cougars are modest (102 carries, 383 yards, 5 TDs) in part because he handles the heavy lifting between the tackles. In track, Anders has state meet potential in the 400 meters, though hamstring injuries have ended his past two seasons early.

Off the field, he’s a “B” student, plays the piano, fills in for the lead pianist at Phillips Temple Church and prepares some mean barbecue. While he’s the only boy among the seven children living at home, he’s hardly spoiled by the females.

“Excuse me?” wails Laverne when asked if Malcolm is catered to by the girls. “It’s the other way around. If they want something cooked, they go get him.”

Adults call Anders an old soul. His musical taste runs from gospel to Dr. Dre to The Temptations to AC/DC to Kenny G. He plays Scrabble, Monopoly and dominoes. He reads James Patterson novels. He likes the “old soul” label.

“Who I live with, they’re a little older,” says Anders. “I listen to the music they listen to.”

At Denny’s, Malcolm stops eating, sets down his fork and looks out a window when told he must appreciate Levi and Laverne coming into his life.

“I’m really, really truly blessed for everything they’ve done for me,” he says. “I would not be the person I am without them.”

Yet he’s hurt that his mother abandoned him and his sisters.

“Most definitely,” he says.

Anders’ father, Greg Anders, played backup quarterback at Lincoln High in the early 1970s. He moved to Northern California where he worked for the U.S. Postal service as a mail handler.

Greg says that on May 30, 2003 — he memorized the day — Raina took the children to one of her cousins in Oakland, dropped them off and left them there for days.

“I trusted my wife,” says Greg. “She said she’d be gone overnight, was helping a cousin apply for a job. I was worried what happened to them. My wife had a lot of (family members) covering for her.”

When Raina didn’t return for the children, the cousin called Child Protective Services, leading to Malcolm, Sky, Ashanti and Brianna being moved among foster homes. After his sister earned her foster care license, Greg decided it would be in the children’s best interest to be raised by their aunt.

“(Raina) had four young children,” says Greg. “She had two or three from a previous relationship. She was dealing with a lot of young children at the time. … Maybe I could have done things differently also.”

He lives in nearby Lemon Grove and sees the children about once a month, at family get-togethers, birthdays, at church. He’s in the stands for Malcolm’s football games.

“That’s the word I would connect with Malcolm, peaceful,” Laverne says. “Amidst all the drama, he’s very peaceful.”

In the summer, between the Cougars’ two-a-day football workouts in sweltering heat, teammates piled into the Mitchells’ 15-seat van Malcolm drove. Malcolm cranked the AC, played some AC/DC and the kids literally chilled.

“We laughed at him about his musical selections,” says teammate Nye Johnson.

“We don’t allow a lot of kids in the coaches’ office,” says Steele Canyon football coach Scott Longerbone. “But he’s welcome all the time. You can’t help but be drawn to him.”

“I wish I could adopt him,” says Stathas. “Are you kidding me? He’s awesome. I love him.”