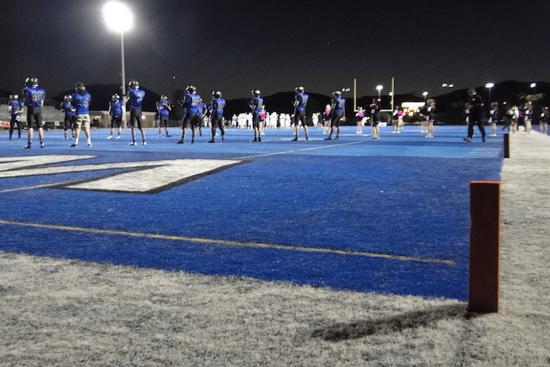 West Hills warms up on its blue field for a win over Santana.

Behind running back Taj Broomfield’s four total touchdowns, the Wolf Pack ran past the Santana Sultans 45-42 to move to 2-1 in the Grossmont Valley League.

On the game’s first play from scrimmage, Broomfield took the handoff down the left sideline for a 61-yard touchdown run to give the Wolf Pack (4-5, 2-1) the early lead. After a quick three-and-out by the Sultans (6-3, 2-1), Broomfield scored again on the ground, this time from 45 yards out to make it 14-0 less than five minutes into the game.

Later in the first quarter, West Hills added two passing touchdowns by quarterback Spencer Moyer — an 8-yard strike to Broomfield and a 4-yard touchdown TD grab by wide receiver Tyler Sepulveda — and the score was 28-7 after one quarter.

But it was a tale of two halves. Down 35-7 at halftime, Santana scored 28 unanswered points to tie the game early in the fourth quarter, courtesy of two passing touchdowns and a rushing touchdown by quarterback Frankie Gutierrez, and a 74-yard punt return for a TD by wide receiver Adam Childress.

The Wolf Pack took a 42-35 lead on a 64-yard TD run down to left sideline by Broomfield, his fourth of the game. A 34-yard field goal by CJ Erwin with just over two minutes left in the game gave the Wolf Pack a 45-35 lead.

Santana scored a touchdown to cut the deficit to 45-42, but the Wolf Pack recovered the onside kick to seal the victory.

Friday’s matchup marked the 26th Annual “Battle for the Cup,” which began in 1990 to highlight the crosstown rivalry. West Hills has won 10 of the last 12 matchups.