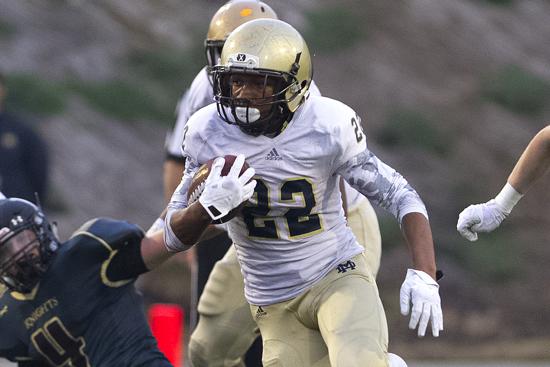 Mater Dei Catholic's CJ Verdell (shown in an earlier game) scored on a 99-yard run for the Crusaders.

The Crusaders scored on all five of their first-half possessions en route to a 48-7 drubbing of visiting Mar Vista to clinch the league title in the season finale for both teams Friday night.

The Crusaders (9-1 overall, 3-0 Metro South Bay) were totally in charge right out of the gate.

First it was the defense. Mario Williams caused his first of two fumbles on the night. This one was picked up by teammate Jayden Emberton-Gaines, who raced in from 34 yards out for the TD.

After another Mar Vista turnover, quarterback Chris Jones connected with Quentin Frazier for a 31-yard score and a commanding 14-0 lead with 7:40 left in the first quarter.

Then it was CJ Verdell’s turn. The first time he touched the ball, Verdell (5 carries, 115 yards, TD) became the 12th player in section history to run 99 yards from scrimmage, giving the Crusaders a 21-0 lead with 3:56 left in the first quarter.

The only blemish on the Crusaders’ record is a forfeit to El Capitan in Week 2. On the field, Mater Dei actually fought back from a 14-0 deficit to beat the Vaqueros 28-14 but were later given the forfeit for using an ineligible player.

With the victory the Crusaders should claim the No. 1 seed in the Division IV playoffs.

The Mariners (7-3, 1-2) will surely be in the Division IV bracket with a chance for a home game.

The playoff pairings will be announced today.