RB finishes with a flourish 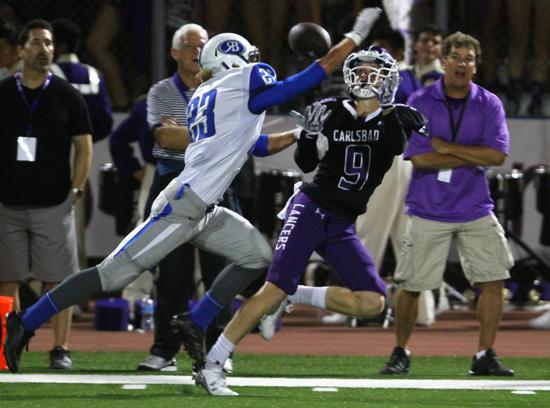 The Rancho Bernardo defense (shown making a play in an earlier game) made life difficult for Poway on Friday night.

After dropping their league opener to Westview, the Broncos closed the regular season with four straight victories, including Friday night's 14-0 title-clinching win over rival Poway at Rancho Bernardo High.

It is the second straight league championship for the Broncos, who avoided sharing the title with Westview (7-3, 2-2) since the Wolverines lost to Mt. Carmel in their regular-season finale.

The Titans (5-5, 2-2) could have claimed their first title since 2012 with a win, but they could not solve a smothering Broncos defense. Rancho Bernardo (8-2, 3-1) forced eight punts and had three interceptions while holding Poway to just 147 yards of offense.

Devaughn Vele, who had one of those picks hauled in six passes for 169 yards and two TDs to lead the offense. The speedy 6-foot-4, 175-pound receiver picked up most of his yardage on an 87-yard scoring pass from Mark Salazar to give the Broncos a 14-0 lead with 5:54 to go.

Other than that, the two defenses did not allow any big plays. Poway bottled up the Broncos’ Milan Grice, holding the junior to just 50 yards on 21 carries. Rancho Bernardo punted the ball away eight times and lost a fumble.

The Broncos went up 7-0 with 13 seconds to go before halftime. Rey Velasquez forced a Poway fumble on a punt return and Christian Baker fell on it for RB. Salazar found a wide open Vele for a 19-yard score on the next play.

The two teams will now await their playoff seed. The selection committee meets Saturday at 9 a.m. at the San Diego Hall of Champions. The Broncos entered their regular-season finale ranked No. 3 in the Division II power rankings, used to determine playoff seeding. The Titans were ranked No. 10 in Division I.