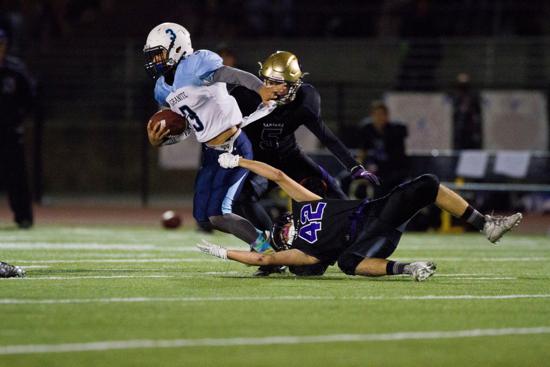 Granite Hills senior Thomas Youmog runs over a tackler while rushing for 256 yards.

SANTEE — Two hungry teams that hadn’t won a league championship in this millennium squared off Friday night for the Grossmont Valley League crown.

Thomas Youmog made sure the crown would go to Granite Hills. The senior tailback reeled off 256 rushing yards on 15 carries, including touchdown runs of 63, 4 and 70 yards to lead the Eagles to a 41-13 win over Santana.

Sophomore quarterback Jacob Siegfried added 123 rushing yards and TDs of 27 and 75 yards as the Eagles piled up 443 rushing yards.

It is Granite Hills’ first league championship since 1988.

“It feels great,” Granite Hills’ Riley Reyes said. “It hasn’t happened in awhile, but we knew we had the talent and the skill to pull it off.”

The Eagles (9-1, 4-0) have now won eight in a row since dropping a 17-10 loss to Valhalla in Week 2. Granite Hills has the best record among the Division II playoff teams and likely will get a top-four seed when the playoff brackets are released this morning.

Santana (6-4, 2-2), which hasn’t won a league championship since 1999, will likely host a first-round playoff game in Division IV.

The Sultans’ Bobby Wallace rushed for 130 yards. Santana came into the game averaging 40.1 points per game, but the Eagles had allowed only 11.3.

Santana notched a pair of Timmy Tischer field goals before Granite Hills handled the ball correctly. The Sultans ran 14 plays in their opening possession and led 3-0 with Tischer’s 34-yard field goal. Alec Koval recovered a fumble on the ensuing kickoff, and the Sultans took a 6-0 lead on Tischer’s 32-yard field goal.

Granite Hills took a 7-6 lead when Youmog bolted through the middle for a 63-yard TD sprint. Breaking numerous tackles, Siegfried made it 14-6 at the half with a 27-yard TD scramble.

Santana ran 37 plays in the first half but had only 87 yards, while Granite Hills had 191 yards – all but four on the ground – on just 19 plays. By intermission, Youmog already had 128 rushing yards.

The Eagles also got sacks from Ahmad Jones, Kellen Gaeir and Jacob Burton. Santana’s Matt Homan posted his eighth sack of the season.