Cougars use passing game and special teams to beat Vista 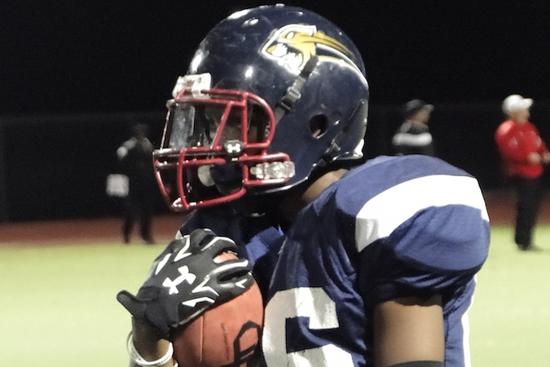 Steele Canyon will face Grossmont in next week's Division I quarterfinals.

Going into Friday night’s Division I first-round playoff game, the running game was known to be the strength for both No. 7-seeded Steele Canyon and No. 10-seeded Vista.

But it was the passing game and special teams that proved to be the difference as Steele Canyon defeated Vista, 31-20, to advance to the quarterfinals.

The Cougars’ next opponent will be No. 2-seed Grossmont, which Steele Canyon defeated 39-36 earlier this season in Grossmont Hills League play.

It was a tough start for the Panthers, as they muffed the opening punt, which the Cougars recovered at the Vista 25-yard line to set up a 24-yard touchdown pass from Fishburne to running back Pierre Alexander.

The Panthers scored 10 points on their next two drives on a 13-yard TD run by running back Cesar Mariscal and a 21-yard field goal by Chris Stalter to take a 10-7 lead early in the second quarter.

But the momentum quickly shifted to the Cougars, who outscored the Panthers 24-10 the rest of the way.

With 57 seconds left in the first half, Alexander found himself in the right place at the right time as Fishburne’s pass was tipped in the end zone and caught by Alexander for a 7-yard score to give the Steele Canyon a 17-10 lead at halftime.

In the second half, Fishburne connected with Ny Johnson for an 83-yard catch-and-run TD and Sean Todd for a 74-yard touchdown to seal the victory.