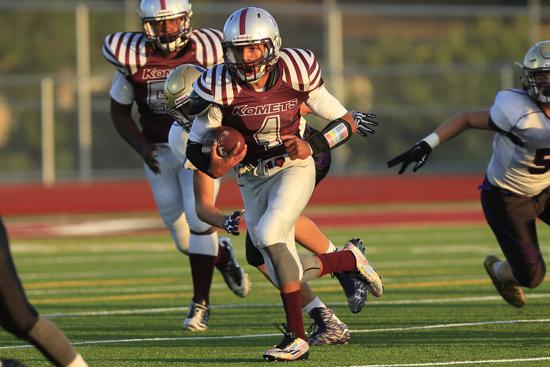 Much like how Kearny High’s season progressed, quarterback Takoda Browne progressed in the same fashion in Friday night’s football playoff game, the Komets’ first appearance in the playoffs since 2011.

The Komets had a 1-5 record before winning four straight games, clinching the Central League title, the No. 9 seed and a home playoff game against El Cajon Valley, which hadn’t appeared in the postseason since 2005.

But Kearny was ready, and rode an explosive second half to sweep aside the Braves 28-12 and set up a date next Friday at No. 1 seed Mater Dei Catholic.

Injuries and eligibility issues had weakened El Cajon Valley’s roster in the latter half of the season, but the Braves had done enough earlier in the year to secure the No. 8 seed.

In an effort to get more “juice” out of his team, coach Parris Pisiona gave them the day off Wednesday.

For the first half of the game, a slow-moving affair with nine injury stoppages and an exorbitant amount of penalties, the Braves contained Kearny.

Pisiona specifically wanted to contain Browne, and El Cajon Valley’s defense held him to under 50 rushing yards in the first half.

But Kearny’s passing game proved to be the difference.

He also ran for two touchdowns and nearly had another.

Only one of his passes was for less than 10 yards, a 4-yard touchdown to a wide-open Bryan Le in the third quarter.