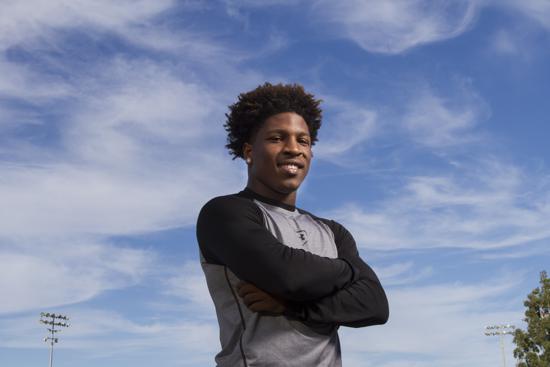 Helix senior running back Nate Stinson, who has committed to Northern Arizona, has had back-to-back 1,000-yard seasons.

LA MESA — It should be no surprise that the running back Helix High’s Nate Stinson emulates is former Charger LaDainian Tomlinson.

Change the color of the uniforms and the venues and what you have in the Highlanders’ standout running back is a smaller version of the probable future NFL Hall of Famer.

“I met LT on my way back from San Jose,” says the 5-foot-6, 175-pound Stinson. “We stopped by the NFL Network in Los Angeles, and I was kind of awestruck.”

The fact he bears such a resemblance is no coincidence.

“I move like LT, I carry the ball like he did, I control my speed, I try to freeze the defensive back and linebackers like he did. I watch a lot of video. I see and try to practice how he played — practice until it’s natural.”

Obviously, it has worked.

Heading into Friday night’s San Diego Section Open Division quarterfinals against Madison, Stinson has rushed for 1,117 yards and 23 touchdowns. It could be double that except the No. 1-seeded Scotties have played just nine games and in most of them, Stinson was a spectator for most of the second half.

“I haven’t had a 30-carry game, although I’d like to,” said Stinson, who started playing Pop Warner football as a 5-year-old. “I like the games — they’re exciting. There is so much camaraderie on this team.”

Helix lost its season-opener to Chaparral of Scottsdale, Ariz., when they fell behind early and with a late surge, almost pulled out the victory as Stinson scored three touchdowns. They’ve won eight in a row since.

One might suspect that Stinson could be a little cocky after back-to-back 1,000-yard plus seasons. He’s anything but.

“What I really love is blocking,” he said, smiling. “It plays a big part if we score. I don’t smack talk or anything like that, but I do like rolling off hits.”

“He’s a quiet leader, he doesn’t talk much, he just leads by example,” said Stevenson, who has known Stinson since they played on an all-star team together in the seventh grade. “I don’t like guys who talk a lot but can’t back it up. That’s not Nate. He’s the first one I’d go to if I needed help.”

The two, who are also on the Helix track team as sprinters and members of the 4x100 relay team, complement each other.

“The other team always focuses on Nate and stopping the run,” explained Stevenson. “That opens it up for the wide receivers to go 1-on-1 with the defensive backs.”

And when the Scotties are passing, that takes the pressure off Stinson.

“Nate’s come a long ways,” said Stevenson. “He’s got it together, he works hard non-stop — his work ethic is relentless.”

The two share a lot of things on and off the field, but most Sundays Stevenson has to look for someone else with whom to pal around. That’s because Stinson likes to clear his mind and he has a perfect way to do it: fishing.

“I mostly fresh water fish for bass,” said Stinson, who haunts all the local lakes. “I go almost every Sunday, but I also watch all stuff on television. It helps me relax. I don’t eat the fish, I catch and release.

“I’m not obsessed with it or anything, and I’ve only been doing it for three years. It’s challenging, and I like a good challenge.”

Because of his size, he isn’t being recruited like LT, who had a spectacular career at TCU, but he says Big Sky members like Eastern Washington and Northern Arizona are most interested.

All he wants is a chance to prove he can be an impact player at the next level, but only after he leads Helix to the Open Division title.