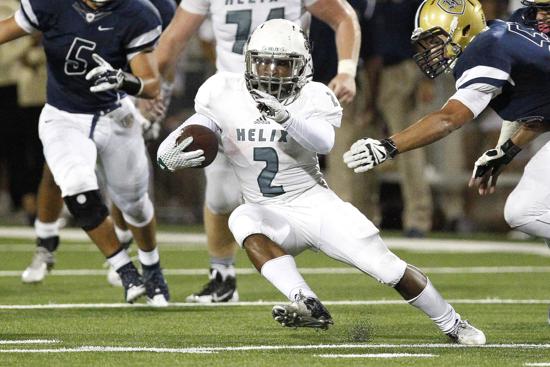 With the section playoffs moving into the quarterfinals Friday night, 2015 has produced a depth of backs rarely witnessed even in these parts.

“From top to bottom, it’s one of the finest groups ever,” says Hoover coach Jerry Ralph, in his 34th season of coaching in the county. “We might not have someone like Marcus Allen, but it’s got to be one of the top groups in the country.”

In that bunch there’s a visionary, a speedster, a future Aztec and an underclassman who might be the best of the lot. Following is a subjective list of this year’s top 10 running backs.

His freshman year at Helix, Stinson was joined on campus by Adrian Petty and Derrick Clark. Both transferred, Petty winding up at Christian, Clark at Mission Bay. Hence, Helix coach Troy Starr calls Stinson “The Terminator.”

While Stinson appears to be a Elijah Preston clone, there’s one thing that separates the Highlander, his 10.7 100-meter speed. He ran a leg on Helix’s 4x100 relay team that advanced to the state meet last June.

“I had five guys who had an angle on him and nobody put a finger on him,” says Steele Canyon coach Scott Longerbone. “There’s not a better back in the county.”

A starter since the fifth game of his freshman season, the diminutive one has rushed for 6,614 yards, second all-time in the section to Royce Freeman’s 7,606 at Imperial. Tack on the 1,142 yards Preston has gained returning kicks and catching passes during his career and he’s gained 7,756 yards, nearly 4½ miles of running with the football.

Those are the cold numbers. Preston, though, must be seen to be appreciated. He’s small only in height, his 180 pounds seemingly sculpted by Michelangelo. His vision is uncanny, Preston waiting for blocks to unfold, defenders to commit, then darting upfield, would-be tacklers bouncing off his thunder thighs.

“He’s been doing it since the ninth grade, with eight, nine men in the box, guys climbing all over him. Plus, he’s seldom been hurt,” says Saints coach Richard Sanchez.

No doubt owning to Preston’s height, colleges have been slow to commit. Cal Poly has shown the most interest.

Question the schedule if you want. Question the kid’s skill at your own peril. Log on the web, look up his highlights and you’ll be left slack-jawed. Touchdown runs measuring 99, 90, 81, 78, 74 and 68 yards.

The 99-yarder vs. Mar Vista was stunning. From the right hash, Verdell starts up the middle, veers left, veers left some more, breaks one tackle at the 1, another at the 3, one more at the 11, spins 360, pulls a Baryshnikov, tight roping the sideline, sidesteps a tackler at the 19, stiff-arms another at the 28, burns down the sideline, then politely places the ball in the back of the end zone.

In four games, Verdell’s first carry resulted in a touchdown.

Bell transferred from Eastlake, where he was a complementary back last season. Thompson says he’s so athletic that Bell could start at five positions in the Pac 12 — cornerback, free and strong safety, running back and slot receiver. He has committed to the Aztecs as a running back.

“He is a very, very physical runner,” says Thompson. “He runs with a purpose and little bit of anger.”

“He’s one of those running backs you could defend the play (well) and he’s still gaining positive yards,” says Sovacool. “You do that one of two ways: make ’em miss or make ’em pay. He has the ability to do both.”

“The thing that separates him,” adds RB coach Tristan McCoy, “is when he accelerates through a hole, he’s got a different gear than a lot of kids.”

There may be better backs but good luck finding a better story. McFarlin played JV football two seasons at Rancho Buena Vista, then transferred to Mission Vista, a San Marcos magnet school that doesn’t play football. Wanting to get back on the field, he left last October for Mission Hills, played some on the JV, got called up to the varsity but didn’t play because of a hamstring strain.

Until August, McFarlin (nicknamed Nemo) hadn’t played a down of varsity football. Last Saturday, he found himself on a recruiting trip in the Rose Bowl, guest of the UCLA Bruins. He’s an all-around back, a north-south runner with a burst and he can catch the ball.

The Grizzlies’ schedule has been soft, so the playoffs will offer a better test of McFarlin’s skills.

How good of an athlete is Clark? Last season he was the Buccaneers’ starting quarterback. He moved to running back this fall and has committed to Cal, where the Bears envision him as a slot receiver. He’s also unselfish.

“We used him as a decoy at times,” says Mission Bay coach Willie Matson. “He didn’t always have to be the star.”

The Warhawks obliterated so many opponents that Buchanan carried the ball six times or fewer in four games. He’ll get his carries tonight when the Warhawks hit I-8 to visit Open Division No. 1 seed Helix.

“He’s extremely physical and explosive,” says Madison coach Rick Jackson. “He’s going to be one of those guys who explodes out of high school.”

Worth noting: Buchanan is only 15 years old.

Gray was a marked young man at Ted Williams’ alma mater. The Cardinals (2-8) offered little threat of an air game, completing 29 passes the entire season. With defenses keying on him, Gray touched the ball on 60 percent of Hoover’s plays from scrimmage.

Adds Ralph, Hoover’s head coach, “Once he gets in the secondary, it’s pretty much over. It’s his desire. He doesn’t want to go down.”

On Sept. 18 against Steele Canyon, Taylor staged quite the exhibition, rushing 33 times for 436 yards, tying the section record for most yards rushing in a game. He’s a physical, north-south runner.

Best of the rest