Sundevils jump to a 21-0 lead and never look back 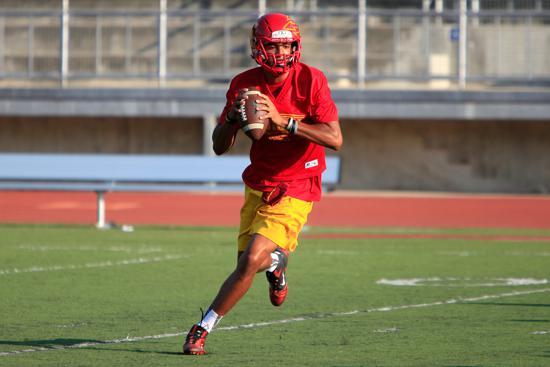 Lucas Johnson threw three touchdown passes in the first half for Mt. Carmel.

Playing its intradistrict rival for the second time in two weeks, the Mt. Carmel High football team made sure a letdown was not in the cards for the playoffs.

The Sundevils rolled to a 48-14 victory Friday night over Westview in a Division II quarterfinal matchup at Sundevil Stadium. No. 4 seed Mt. Carmel (8-3) will now play top-seeded Valhalla next week in the semifinals.

Mt. Carmel quarterback Lucas Johnson threw for three touchdowns in the first half of the playoff win over Westview while completing 17 of 26 passes for 269 yards. The Sundevils’ first three offensive possessions of the game resulted in Johnson scoring passes to Rashid Shaheed for 8 yards, Dane Hines for 43 yards and Kevin Benavente for 4 yards as the hosts mounted a 21-0 lead within the first 10 minutes of play.

Isaiah Tate chipped in with a pair of 1-yard scoring runs, and Ashlin Morey added a pair of field goals of 28 and 25 yards for the winners. A blocked put by Dylan Hunt led to a 25-yard scoring pass from Johnson to T.J. Sullivan in the third period.

Johnson finished the game completing 22 of 33 passes for 354 yards with four touchdowns and one interception. His favorite receiver was Shaheed with nine receptions for 144 yards.

No. 5 seed Westview (8-4) was coming off a 7-0 first-round win over San Pasqual. The Wolverines did close to within 21-7 on a 9-yard scoring pass from Beau Nelson to Ben Ratzlaff, but the only other Westview score was a fourth-quarter TD pass from Nelson to Ratzlaff covering 28 yards.

The two rivals were meeting in the playoffs for the second time in three years. Mt. Carmel won 26-14 in 2013 in a Division I first-round matchup.

Mt. Carmel has been to the playoffs each year since John Anderson took over as head coach prior to the 2011 season.

“This is all about us and our team advancing,” Anderson said prior to Friday’s kickoff. “Taking that next step, that is what’s important.”

Westview was seeking its second nine-win season since the school began varsity play in 2003.