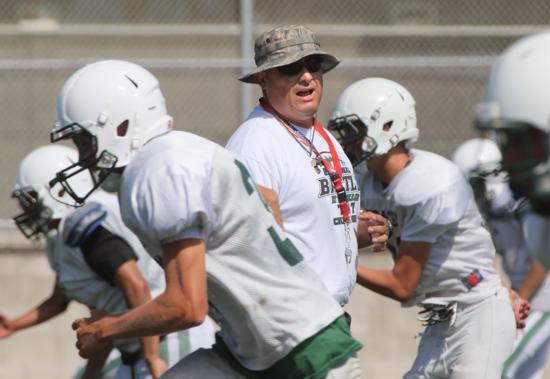 New coach Dave Rodriguez has guided Oceanside into the Division I semifinals.

OCEANSIDE — Oceanside took advantage of sloppy play on special teams by San Marcos to take a 21-point halftime lead and rolled to a 41-14 win over the visiting Knights in the San Diego Section Division I quarterfinals Friday.

The top-seeded Pirates (7-4) — who have won 15 section titles, including the Open Division championship last year — will host No. 5 Poway or No. 4 Point Loma in the semifinals Friday as they seek to reach the title game for the 12th straight season.

Special teams mistakes doomed the eighth-seeded Knights (8-4) as all three of Oceanside’s first-half scores were preceded up by miscues. Two bad snaps on San Marcos punts set up Pirates touchdowns, and a muff on a punt return set up the other.

Senior Niko Magio’s 10-yard TD run was sandwiched between a pair of TD passes from senior Robby Beardsley — 10 yards to junior Max Shuffer to open the scoring and 6 yards to Isaia Paopao with 15 second left in the half.

Beardsley, who threw for 106 yards on the night, added a third scoring pass in the third quarter, and senior Nick Zimmerman had a 16-yard scoop and score early in the fourth. Magio had a game-high 149 yards on 17 carries.

The Knights missed a chance to appear in the semifinals for the third year in a row. Junior Bryson Bolin, who threw for 120 yards, hit Kyle Phillips with a 29-yard TD pass and senior Alan Murphy had a 14-yard TD run in the final minute.