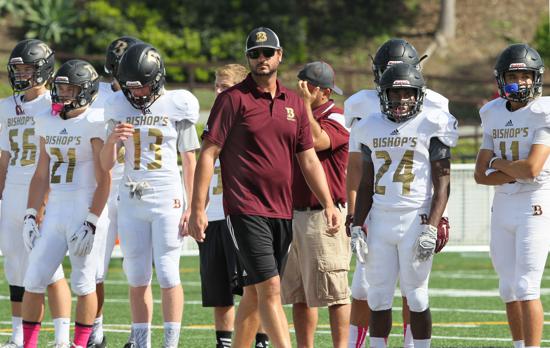 Bishop's coach Joel Allen has the Knights back in the Division IV championship game.

Bishop’s took a big step in its defense of its section title.

The Knights pulled away from host University City in the second half and downed the Centurions 23-7 in a San Diego Section Division IV semifinal Friday.

The third-seeded Knights (8-4) will play No. 1 Mater Dei Catholic in Friday’s final at Southwestern College as they attempt to repeat as DIV champions.

No. 2 University City (9-3) made school history this season, making the semifinals in football for the first time but could not take it a step further, missing a chance to advance to its first title game.

A 38-yard field goal from junior Justin Woodley in the final minute of the third quarter broke a 7-7 tie, and the Knights put the game away with two fourth-quarter touchdowns.

The Knights’ defense grabbed three interceptions, including two in the fourth quarter, as it made the Centurions’ offense one-dimensional. University City senior quarterback Drake Aguon threw for 179 yards, but the team ran for just 19.

Bishop’s offense showed balance. Led by sophomore Hassant Moses-Hillman, who ran for 136 yards and two scores, they totaled 201 yards on the ground, and sophomore quarterback Mozes Mooney threw for 163 yards and a score.

University City opened the scoring with a 12-play, 99-yard drive that culminated with Moses-Hillman’s 7-yard TD run early in the second quarter. The Centurions evened the score on a 10-yard scoring run from senior Tomo Pollard with 34 seconds left in the first half.