Up-down El Camino is back up

Wildcats to face crosstown rival Oceanside for Division I title 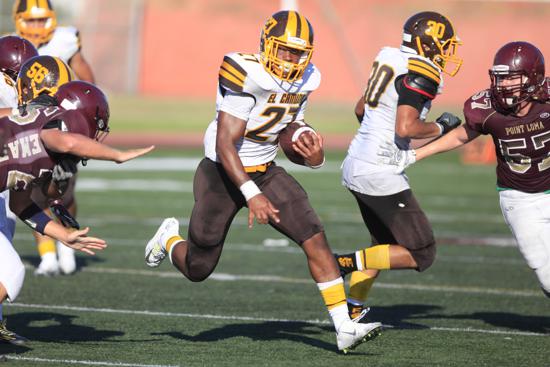 El Camino's Chris Brown scored on touchdown runs of 27 and 37 yards while rushing for 134 yards on 13 carries Friday night.

The one-two punch of Chris Brown and Aris Jackson combined to lift the Wildcats to a 28-18 victory over the Cougars in a CIF Division I semifinal clash Friday night at Herb Meyer Stadium. Brown scored on touchdown runs of 27 and 37 yards while rushing for 134 yards on 13 carries, and Jackson scored on a 14-yard touchdown reception in addition to rushing for 106 yards on 17 attempts.

No. 3 seed El Camino (7-5) now advances to the Division I finals next Friday at Southwestern College against crosstown rival and top seed Oceanside, a 28-24 winner over Point Loma in Friday’s other semifinal.

No. 7 seed Steele Canyon finishes the season at 8-5. Friday’s game was a rematch of last year’s Division I quarterfinal won by the Wildcats, 33-31.

El Camino has had a roller-coaster season under second-year coach John Roberts, winning the first five games before losing the next five straight to finish the regular season at 5-5.

“We have certainly had our share of ups and downs this year,” Roberts said before kickoff. “But our kids have worked real hard to get back to the semifinals.”

Following a first-round bye, the Wildcats recovered from its five-game losing streak with 14-10 win over Torrey Pines last week in the quarterfinals to advance to their second straight Division I semifinal appearance.

El Camino was the first to get on the scoreboard when the Wildcats converted their second offensive possession into a nine-play, 84-yard drive which resulted in a 14-yard scoring pass from Beau Gallegos to Jackson on a swing route out of the backfield with 1:29 remaining in the first period.

Following a punt by the Wildcats, the Cougars tied the score with a drive ignited by a 48-yard run up the middle by Pierre Alexander on the first play of the series. Four plays later, quarterback Thomas Fishburne took a keeper around right end for a 12-yard touchdown run that tied the score with 5:44 left in the second quarter.

A 33-yard return by Wayne Steward on the ensuing kickoff sparked the Wildcats’ next series, which began with a 16-yard run by Brown and ended five plays later with a 27-yard scoring romp by Brown over the left side with 3:07 left in the first half. Brown’s TD run came one play after Gallegos scrambled for 16 yards on fourth down from the Steele Canyon 43-yard line.

Steele Canyon began the second half with a time-consuming drive that led to a 30-yard field goal by Alexander Raya, but the Cougars came up empty on their next two possessions. When Brown rambled 37 yards for his second TD of the night following a personal foul penalty on Steele Canyon, the hosts had a 21-10 lead with 9:41 left in the fourth period.

A 1-yard TD run by Spencer Katoanga for El Camino countered a late 54-yard scoring pass from Fishburne to Ny Johnson for the Cougars.