Playing linebacker only part of the package for Broncos' senior standout 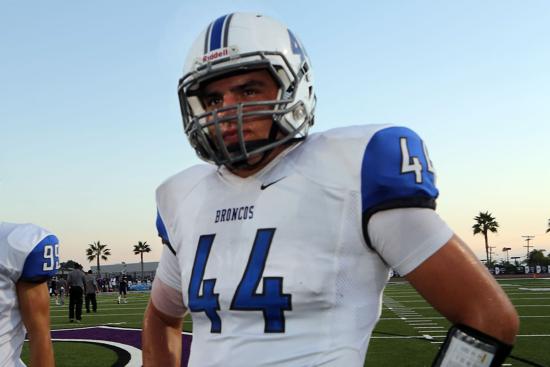 Rancho Bernardo linebacker Devin Dunn has 117 tackles along with two sacks, an interception and a fumble recovery this season for the Broncos.

Devin Dunn walks around as a star football player, one of the best linebackers in San Diego County.

But on the Rancho Bernardo High campus the senior has become known for so much more.

A former Eagle Scout, the 6-foot-1, 225-pounder was the junior class president, is heavily involved in community service and is a Bronco Ambassador, going around the elementary schools to speak to students about making the right choices in your life.

Dunn also sings in the school choir, something he started doing as a freshman.

“Sometimes, I get weird looks when people hear I’m in the choir,” Dunn said.

“Freshman year I got a few chuckles and one of the coaches on the freshman football team called me ‘Choir Boy’ that whole year.

“I sing base. The funny thing was my voice was still cracking back then.

“Now guys think I’m crazier than ever for being in the choir.”

On the football field, Dunn is no choir boy.

The middle linebacker, who was promoted to the varsity as a sophomore during a horrendous 1-9 season two years ago, has made running the ball through his slot a stern test.

“He takes care of our box,” Broncos coach Tristan McCoy said. “He brings his lunch pail, his hard hat and he goes to work.

“Devin is an old-school player. Last year, he backed up at tackle so he wore No. 66. We thought he played like (former Green Bay Packers linebacker) Ray Nitschke.

“We have a term ‘real guy’ and Devin is one of the few real guys we have out there.”

After that disastrous sophomore season, coming on the heels of a 1-10 season in 2012, the Broncos (10-2) have relied on defense and a mistake-free offense to compile a 20-5 record over the past two seasons heading into Saturday’s San Diego Section Division II championship game against rival Mt. Carmel (9-3) at 3:30 p.m. at Southwestern College.

Last season, El Capitan ruined the Broncos’ dreams of a capturing the Division II title with a 14-7 win in the finals.

“We went 2-19 my first two years at RB, and despite that we were super upset about losing last year,” said Dunn, who leads the Broncos with 117 tackles along with two sacks, an interception and a fumble recovery after posting 115 stops as a junior.

“We can’t do that again, lose in the finals.

“I don’t want to feel like that ever again. Looking at the seniors’ faces afterward was hard.

“We have to finish the mission. The only way to do that is to finish this bad boy right because I want to see that banner in the gym. I’ve always wanted to see a white banner with 2015 on it.”

Dunn’s older brother Dustin was a quarterback at Rancho Bernardo. His younger brother Dallin was a running back on the freshman team.

“They’re more elusive than I am,” said Devin, laughing. “To be a linebacker you have to have a wild side where you lose your mind a bit, but you keep it under control and make plays.

“I love football because it’s a sport where one guy can’t win a game.

“In basketball, a guy can get hot and score 50 and you win.

“In baseball, a pitcher can get hot and you can win.

“In football, everyone has to make plays. And I love making plays.”

Now that’s something to sing about.