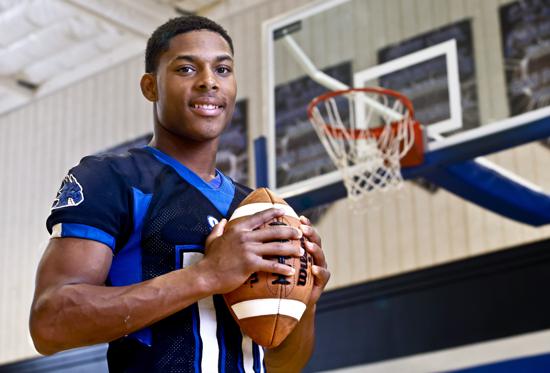 San Pasqual Academy’s Devante Ransom has excelled in football and basketball, where he averaged 22.2 points a game last season.

In sixth grade, Devante Ransom watched the box-office hit “The Blind Side.” The film about impoverished teenager and future NFL offensive tackle Michael Oher being adopted by Sandra Bullock’s character struck a nerve with Ransom.

“I want to inspire other foster children,” says Ransom, a senior at San Pasqual Academy where he has starred in football and basketball. “I want to put it out there that you can be anyone you want to be.”

Ransom was raised by his maternal grandmother until he was about 5. When his grandmother became ill he began bouncing among foster families, seven by his count. Some of his memories are gut-wrenchingly sad.

He says when he was in first grade he went to live with an extended family member.

“I was crying about something,” Ransom recalls.

He says a relative’s grandfather grabbed him by the neck and tossed him about, causing him to bleed.

“To this day, that relative doesn’t believe me,” says Ransom.

He remembers being labeled a “bad kid” when he was younger.

“I was always baffled by that,” says Ransom, who is talkative and outgoing. “I didn’t understand how I could be bad when I got good grades, I did chores, walked the dog. I really, really struggled with that. It impacted my life a lot.”

Asked about the challenges of being uprooted so often in his life, Ransom smiles and say, “It makes for good social skills. You have to adapt. You have to learn how to deal with different types of people.”

Late in his freshman year, Ransom was brought to San Pasqual Academy, a boarding school for foster children.

Initially, the adjustment was difficult. Now he raves about the environment at the school nestled in the San Pasqual Valley, surrounded by orange groves, palm trees and spectacular mountain views.

“I do have a form of security,” he says. “I love the director, Tia Moore.”

Ransom reaches out to Moore often for counseling, sometimes as late as midnight.

“I call him Pops,” says Ransom.

San Pasqual Academy’s enrollment is 104 co-ed students, ranging from sixth to 12th grade. The Dragons play eight-man football. The team started with 20 players and finished with 15.

As a linebacker, Burgo said Ransom’s pursuit was “the best of any player since I’ve been here.”

In basketball, Ransom averaged 22.2 points, 11.4 rebounds, 4.6 steals and 1.6 blocks last season, leading the team in every offensive category but assists.

While Burgo and Bryan Moore marvel at Ransom’s athleticism, they rave more about his character. In football, when an opposing player began cramping up, Ransom walked over and helped him stretch his hamstring.

“He has a humongous heart,” says Burgo.

That kindness is combined with what Bryan Moore says is an “alpha male” attitude.

Ransom would like to play football and basketball in college.

Says Ransom, “Being a foster kid, you have to choose what path you take. You could be a statistic or you could tell your own story.

Adds Bryan Moore, “I’m so much looking forward to going to a college game of his in the future, no matter what the sport, and cheering for him.”