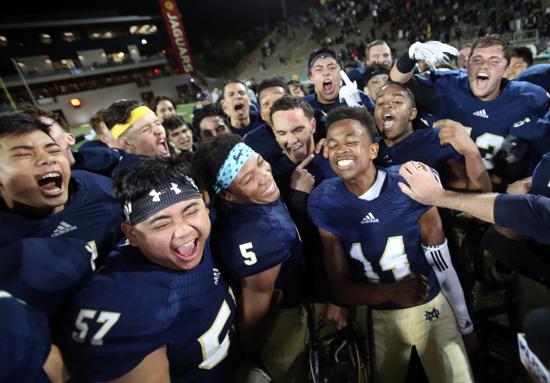 CHULA VISTA — The team was so close to claiming a Division IV football championship last year only to lose in overtime to Bishop’s.

Mater Dei Catholic has lived with that for a year.

The No. 1-seeded Crusaders scored early — returning the opening kickoff 87 yards — and often to claim the San Diego Section Division IV crown with a 49-14 thumping of Bishop’s on Friday at Southwestern College.

“Our motto all season has been to finish,” said Mater Dei coach John Joyner, whose team dropped a 19-16 decision in overtime to Bishop’s in the 2014 finals. “We didn’t finish last year’s finals, but I’m pretty happy right now.

“The memory of last year’s finals helped us the whole offseason. That memory helped us and stuck with us every day.”

Mater Dei (12-1) scored on its first three possessions and owned a 28-0 lead by the end of the first quarter.

Instead of running back CJ Verdell matching his 21-carry, 381-yard rushing effort from Oct. 2 in a 42-21 win over Bishop’s, Mater Dei employed big plays.

Eli Shelton’s return of the opening kickoff got the Crusaders started. Quarterback Chris Jones ran for a 1-yard TD before hitting Shelton for an 80-yard touchdown pass.

Verdell did manage to score on a 30-yard run after regaining his balance at the line of scrimmage, pushing the lead to 28-0.

“There was a lot of passing in this game,” said Verdell, who added a 54-yard TD catch in the second half and picked off a pair of passes.

“It was perfect to get Bishop’s again.

“Bishop’s really came into the game trying to stop me. We have other weapons.

“As long as we get a ring and a banner I’m fine with the way the game went down.”

Leading 35-7 at halftime, the Crusaders merely had to finish to claim their first title since 2002 when the school was called Marian Catholic.

“I was at Parker last year, but I heard all about losing last year’s finals,” said Shelton, who entered the game with seven TD catches for the season.

“I never expected this kind of game, especially the way our last one went with them.

“I was shocked the whole first half at what was happening.”

Shelton added a 96-yard TD catch in the third quarter as well as intercepting a pass and knocking down another four passes by Bishop’s (8-5) at cornerback.

The junior receiver finished with four passes for 250 yards and the three TDs.

“It was a long year coming to this night. This was our goal. We were really hoping to get Bishop’s again.

“It would have meant a lot to win this no matter who we played. Getting Bishop’s was added motivation.”

The last thing the Crusaders needed was extra incentive other than what they carried with them for the last 12 months.