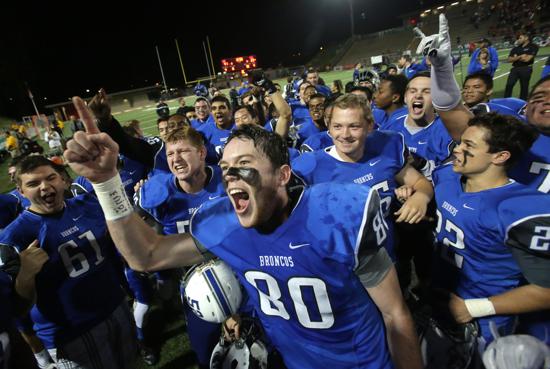 Rancho Bernardo players savor their championship after defeating Mt. Carmel in the Division II finals. RB is one of six local champs advancing to the state playoffs.

CHULA VISTA — Despite rebounding from a combined 2-19 record the previous two seasons, the Rancho Bernardo High football team was not satisfied with its runner-up finish in the Division II playoffs last year.

In fact, just days after the loss to El Capitan in the final, the Broncos held a meeting to discuss their goals for 2015. It was there that the slogan “Finish the Mission” was born.

On Saturday, Rancho Bernardo did just that.

Milan Grice rushed for 153 yards and a pair of touchdowns in the second half and Rancho Bernardo shut down Mt. Carmel’s big-play offense to erase a 23-21 halftime deficit and capture its first section championship since 1995 and third overall.

“The day after we lost in the title game last year we talked about our goals for the next season,” Broncos defensive end Mitchell Lindgren said. “We got so close last year and the only thing on our mind was getting back to the title game and finishing the mission.”

It’s the first section title for Tristan McCoy as a head coach. But he was part of the 1993 and 1995 Rancho Bernardo championship teams as a linebacker.

“It is totally different,” McCoy said when asked to compare winning a title as a coach and as a player. “But probably a little more gratifying to do it as a coach.”

The Broncos will advance to their first Southern California Regional contest in school history with the site and their opponent being announced today.

Early on it looked like Rancho Bernardo (11-2) was going to cruise to the Division II title, taking a 21-0 lead in the first 11 minutes of the game. Torey Franklin returned an interception for a 75-yard score, Jeff Molino hauled in a 25-yard TD pass and Grice had a 1-yard run for a score.

But the Sundevils (9-4) stormed back behind a flurry of big plays by Rashid Shaheed, including a 99-yard kickoff return for a score and a 90-yard TD reception, to take a 23-21 lead into halftime.

“We had it right there,” said Sundevils’ senior quarterback Lucas Johnson, who led the school to its first section championship game since 1982. “We had it and then we just came out flat and let it go. We just let it slip away.”

The Broncos grabbed the momentum and the lead for good when Grice raced 79 yards for a touchdown on the first play of the third quarter. That ignited the Rancho Bernardo defense, which proceeded to hold the Sundevils to just 22 yards in the second half.

Rancho Bernardo kicker Matt Araiza broke the section record for field goals in a season, connecting on his 16th and 17th in the second half (old record was 15 set by former St. Augustine kicker John Cortney in 1997).

Grice put the finishing touches on the win with a 25-yard run with 3:45 left.

“Our motto since the end of last year was to Finish the Mission,” Grice said. “And we did it. And now we are champions.”