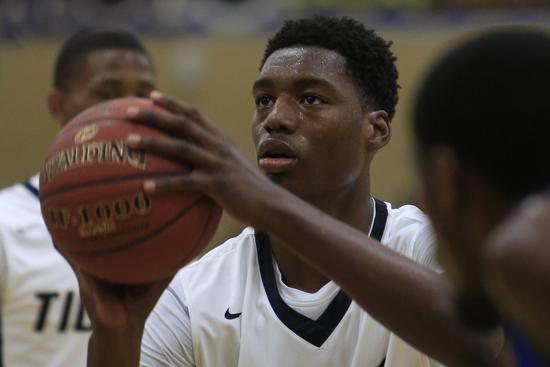 Brandon McCoy has transferred from Morse to Cathedral Catholic.

A 5-star ESPN recruit, who has signed with UCLA. Averaged 27.4 points, 14.2 rebounds, 4.8 assists and 2.7 blocks a game last season. ESPN: “Combines skill and athleticsm. Excels in transition and in a half-court game. Great shooter and has great first step off the dribble. Jumps with the best in the country.”

A 3-star ESPN recruit, who has signed with UC Irvine. ESPN: “Top post prospect with long arms and impressive timing. Good hook shot with either hand. Good defender with a high motor. Runs the floor well.”

A 3-star ESPN recruit, who has offers from Nevada, USC, USD and New Mexico State. Averaged 13.9 points, 9.3 rebounds and 3.7 assists as a sophomore while making 61 3-pointers. ESPN: “Mature with broad shoulders and long arms. Must play under control.”

A 2-star ESPN recruit, who has offers from Cal, Oregon, USC, Utah, Washington, Wyoming and San Diego State. ESPN: “Highly mobile. Plays above the rim in traffic.” Scout.com has him as the No. 12 player in his class.

A 2-star ESPN recruit. Averaged 13.8 points, 11.2 rebounds, 2.7 assists and 1.1 blocks as a sophomore. San Diego State has shown interest in him. Rivals: “Considered one of the top local players in his class.”

Has grown 3 inches from last season and is starting to draw attention. Rivals has him as the No. 24 prospect in his class. Scout: “Post prospect with terrific upside. Good feet and solid hands. Has some bounce to his game.”

One of the best-kept secrets in the county playing at a new, small school. Averaged 17.2 points, 12.7 rebounds and 4.0 blocks last season. ESPN: “Sleeper for Division I level. Rangy four-man who plays at a frenetic pace.”

Averaged just 2.7 points and 2.7 rebounds last season, but improved tremendously and showed flashes of brilliance. Scout: “Big body with skills in the paint. Loves to play and is determined to improve. Great student of the game with great big-man coach in John Olive.”

Averaged 5.4 points, 6.2 rebounds and 4.1 blocks as a freshman. Scout: “Big-body player with a big upside. Needs to improve every aspect of his game, but has a great work ethic. Wants to learn and improve.”