No-nonsense coach is no open (play)book 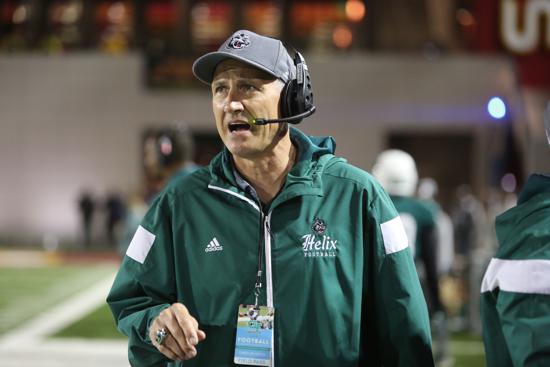 “I may have said six sentences to him, ever,” says Karlo, Grossmont’s head football coach. “I can’t tell you three things about him.”

At 2:30 this afternoon, Starr and his Highlanders will board buses to Orange County, where at 7:30 tonight Helix (11-1) faces Mission Viejo (14-0) in a state playoff game. After eight seasons, it may be Starr’s final game as the Highlanders’ head coach. At 53, he is stepping down at the end of the season.

Intense, detailed, driven, successful, Starr is all the above. Small talk is not his thing.

“I don’t seek the approval of others,” he says. “I don’t know how to schmooze. I don’t get that.”

He is brutally blunt. The Scotties were preparing for an undefeated team once and Starr, believing the opponent wasn’t that good, told his players, “They’re living a lie.”

Helix pitched a shutout, putting more than 40 points on the scoreboard.

“Pissed off for greatness!” was the rallying cry Starr created in the days leading up to Helix’s Open Division championship game last Saturday vs. St. Augustine. Late in the game, 36 inches and 139 seconds were all that separated the Scotties from greatness.

The Highlanders faced third-and-1 on their 48. Starr calls the offensive plays for Helix, but he is not autocratic. Fullbacks and tight ends coach James Cook suggested “Tanks,” a play that was devised just weeks earlier.

Amid the pandemonium erupting on the Helix sideline, Starr grabbed Cook by the arms and said, “Greatest *&%#@8$ call ever!”

Knowing Saints, out of timeouts, still had the faintest of hopes to win — touchdown, recovered onside kick, touchdown — Starr said, “It would have been better if (Stinson) had fallen down on the 10.”

Then he sprinted down the sideline and asked his special teams coach if he ordered a squib kickoff.

Typical Starr. Emotional one moment, analytic the next, always coaching.

The scene that unfolded on the floor of Southwestern College’s DeVore Stadium was electric.

Starr’s only child, 26-year-old son Brandon, a master’s graduate student at San Diego State who keeps stats, walked up to his father and kissed him on his cheek.

“Never too high, never too low,” Starr told his son

Players dumped an ice-cold bucket of water on him.

“Him, right there. That man is our motivation,” said Austin, “and we’re not done yet.”

“I’m telling you now, this dude shouldn’t walk off this field,” a Helix assistant told the players. “You should carry him off.”

Sitting on the artificial turf behind an end zone at Helix four days later, Starr says, “It was magical.”

“He’s done a great job,” Arnaiz says of Starr. “His record is obvious.”

But like many, Arnaiz is surprised that at 53, Starr is stepping away from arguably the best coaching job in the region.

“I don’t think there’s a better job in San Diego County,” Arnaiz says. “He’s a very private person and was hard to get to know. My door was always open, but nobody knocked on it.”

Starr continues to mellow just a bit. Where he once stalked the sideline and wasn’t shy about verbally undressing a player, he still stalks but usually zips his lips, steam seemingly rising out of his head. But make no mistake, come practice he sometimes unleashes his wrath.

“While some find it is kind of harsh, his personality, he’s brutally honest, that’s a great character trait to have,” says Mission Bay running back Derrick Clark, who played at Helix for two years before transferring. “In the long run it makes you a better person. He builds character. He’s working to build them up as men.”

Starr has invited at least five players from underprivileged backgrounds to live with his family, some for nearly a year.

One of them was former running back Darrion Hancock, who lived with Starr for seven months while his mother straightened out her life. Starr took Hancock bowling, to movies, toiled with him in the yard.

“I found out that he’s actually a nice person off the field,” Hancock said five years ago.

Says Starr, “I get the kid from deep poverty. I know it, I lived it, I understand it.”

Starr, who grew up in inner-city Cleveland, never met his father. His mother, who didn’t work but was on welfare, raised three children. Starr was the middle child, the only boy.

“We were poor white trash,” he says.

He played center and linebacker at Collinwood High, becoming a two-time Little All-America linebacker at Division III Mount Union College. Worshipping at the altar of Woody Hayes and Ohio State football, Starr says, “I remember Woody saying when I was a young kid, ‘Show me a good loser and I’ll show you a loser.’”

Starr pauses, then adds, “That’s not always a good thing.”

Helix’s players refer to Starr’s bluntness as “keeping it real.”

An example of Starr keeping it real: “We’re not going to sit here telling kids they can be the next president of the United States. C’mon, what’s wrong with telling a kid, ‘You know, you should be a plumber. You’re not real good in school, you’re good with your hands, you have common sense.’

“Who says a college graduate is successful and plumbers aren’t? I don’t get that at all.”

On Oct. 23, the Highlanders were loading buses, heading to Valhalla. Linebacker Jihad Woods’ cell phone buzzes. It’s a text from Starr. The head coach won’t be joining his team. His wife is seriously ill.

“I expect great leadership from you,” the text reads.

Starr’s wife, also a teacher at Helix, was hospitalized that night. She won’t return to school until January. Starr says his wife’s health is one reason he’s stepping down.

“I’ve got some issues that have to be addressed,” he says, not offering more detail.

He will continue teaching at Helix. He loves the school’s grittiness, the scarred walls, the peeling paint.

“It’s just a blue-collar school,” he says with pride.