Mater Dei’s sack man is on the ball 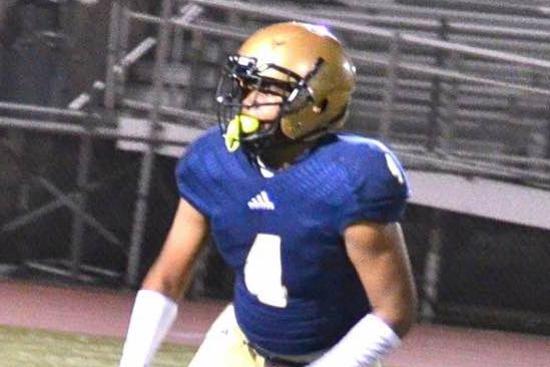 “He walks like his body hurts all the time, like he’s got arthritis,” jokes Mater Dei coach John Joyner.

“But on the field,” adds teammate Jayden Emberton-gaines, “he turns into a young soul.”

Saturday night, the Crusaders (13-1) will host Reedley Immanuel (11-2) in the CIF Division V-AA state championship. When Immanuel quarterback Caleb Paulson drops back to pass, he’ll find out just how fast Williams can be on his feet.

A 5-foot-10, 200-pound outside linebacker, Williams leads the San Diego Section with 18 sacks.

Williams’ skills aren’t limited to slinging quarterbacks to the artificial turf. His 76 tackles rank fourth on the team. He has forced five fumbles and returned his lone interception for a touchdown.

Carrying the same name as Buffalo Bills defensive end Mario Williams, the first pick of the 2006 NFL Draft, Mater Dei’s Williams, too, is a sack master. He recorded a sack in every game but two, with a high of four in the section quarterfinals vs. Kearny.

“He gets off the ball real hard and uses his hands well to get off the blocks,” says Emberton-gaines, the Crusaders’ leading tackler. “He takes good pursuit angles to the quarterback. He’s a real physical, savvy player.”

Williams relishes the moaning sound quarterbacks utter when he delivers a jarring shot.

“It’s kind of like uhhhhhhh,” says Williams. “When I hear that sound I usually look at him and celebrate.”

Williams’ celebration consists of a clenched fist, punctuated with a primal scream.

Screaming apparently is popular among the Mater Dei defenders.

“The other teams think our whole defense is nuts,” he says. “They think we’re crazy. They look at each other all big-eyed. Before the season they thought we were little rich boys who didn’t know how to play football. Then we go out there and start screaming.”

Williams transferred to Mater Dei from Eastlake High before his junior season. After sitting out the requisite five games, he finished the season with eight sacks. The transfer, he says, was almost solely for academic reasons.

He says he earned good grades as a freshman then slipped to a “C” average with more difficult classes his sophomore year.

Recalls Williams, “My dad said, ‘You’ve got to pack it up and go someplace.’”

Williams says class sizes at Eastlake were much larger, as many as 37 in a history class. The class sizes at Mater Dei, he says, typically range from 20-25. His grades have since improved.

“It was a good decision,” he says of the transfer.

His favorite class is economics.

“So I can learn to save money. I have expensive tastes,” he admits.

Most money he paid for a pair of shoes: $250 for black and red retro Air Jordans.

“I wear them when I go out to parties or when I want to look good,” he says. “I keep them nice and fresh.”

Defense, though, is his preferred side of the ball.

“He’s definitely going to play at the next level,” adds Joyner. “It’s about him finding the right spot.”

As for Williams’ elderly amble, he’s an only child and carries an old-soul personality, too.

“Nowadays, kids are a little more egocentric,” Joyner says. “They’re kind of flashier. When kids do crazy dances, he kind of shrugs, looks at me as if to say, ‘You know how these kids are, coach.’”