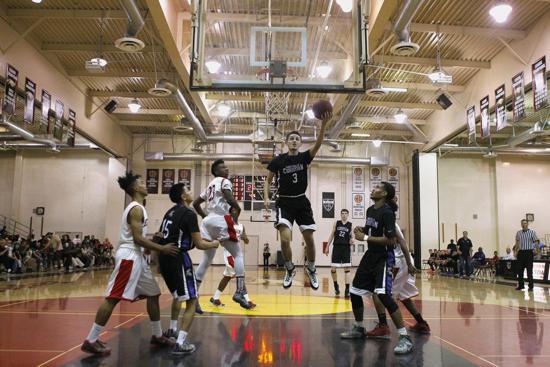 Last season and the start of this one have been a blur of big-time games against top-flight opponents for the Foothills Christian high school boys basketball team.

On Friday, the Knights will make a national television appearance against Cypress Lakes of Katy, Texas.

ESPN2 will carry the contest from Desert Edge High in Goodyear, Ariz., with tipoff set for 3:30 p.m. in San Diego.

“Heck, yes, this is a good deal for us,” said Foothills Christian coach Brad Leaf. “Really, it’s a phenomenal opportunity for our players, the school and for us to represent San Diego.”

The Knights are led by 6-foot-10 forward T.J. Leaf. A five-star recruit by ESPN who has signed with UCLA, Leaf is ranked No. 13 in the nation on the ESPN Top 100.

The Spartans are led by point guard De’Aaron Fox, a five-star ESPN recruit. He’s ranked as the No. 7 prospect nationally and has signed to play at Kentucky.

“Chino Hills was really good, and Lonzo Ball is pretty amazing,” said Brad Leaf. “So it will be interesting for us to see a top-10 player like Fox.”

The Paragon Marketing Group, which is based near Chicago, works with ESPN recruiting expert Pete Biancardi to put together an 11-game national TV package called the GEICO ESPN High School Basketball Showcase.

Foothills Christian, Santa Ana Mater Dei and Chatsworth Sierra Canyon are the other California teams on the TV schedule.

Paragon and Biancardi look at top teams and players when searching for games.

“We’re driving to Arizona,” Brad Leaf said. “The sponsors pick up our transportation costs, food and hotel, so it should be a great experience for our guys.”

The Knights are scheduled to play Sacred Heart of Connecticut in Springfield, Mass., in January.